In 2015 DAPD will focus on Peace, Prosperity, Good Health, Unity and Productivity. 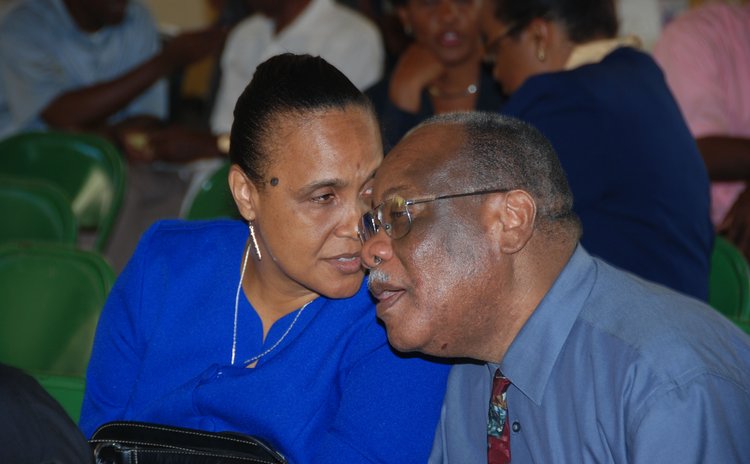 Nathalie Murphy,left, and Michael Murphy- Director and president of the DADP

We have just celebrated the wonderful season of Christmas and ended yet another Calendar Year. At the same time, we have ushered in a New Year, which, we at DAPD hope will be one of Peace, Prosperity, Good Health, Unity and Productivity.

As we evaluate and recount the events which we, as an organization undertook in 2014, we can say that it was a good, satisfactory and productive one, given the outcome of our programmes and activities.

DAPD was able to organize and implement all events and projects planned for last year, hence the reason for rating the year a successful one. This was possible based on the support it obtained from many sources, including the Government of Dominica, the Government of Japan, The United States Embassy in Barbados, Social Partners, and people of Dominica on a whole. More of this will be outlined in our 2014 Narrative and Audited Financial Reports to be presented at our 31st Annual General Meeting. However, it is incumbent on us to highlight in this message, the areas where these benefactors' contributions made a world of difference.

Work on the third and final phase of our Multi-purpose Development Centre comprising of a Dormitory and Auditorium is now underway. Funds for the construction of the dormitory came from the Japan's Grant Assistance for Grassroots Human Security Projects, (GGP) while Funds for the Auditorium have already been approved by the Basic Needs Trust Fund/Caribbean Development Bank.

The Government of Dominica was also among our major contributors providing support for three of our hard-working employees through the National Employment Programme. They also answered to our request for an increase in the Annual Subvention.

For the first time, we acquired support from the United States Government, when, through the Public Affairs Section of the United States Embassy in Barbados, funds were provided for a Training and Mobility Aids project which targeted persons with impaired vision.

Support for conducting of educational and social activities came from Corporate Citizens and many local private donors.

Progress was also made towards the implementation of the UN Convention on the Rights of Persons with Disabilities. Discussions took place with the Ministry concerned and the Consultant appointed to move the process forward. Together, we have developed proposals for a Communication Strategy, Plan of Action and Terms of Reference for the National Disability Council. Further work on this is expected to heighten this year.

2014 was also the final year of our 2010-2014 Strategic and Sustainable Development Programme. The goal for this five year plan was: To continue building on the Association's capacity to become self-sustaining, and strengthen efforts for the disability community to participate more effectively in their island's development.

It is with a sense of pride that we publicly state that significant and important goals were achieved during that period, as we sought to improve the status of persons with disabilities in Dominica.

Our accomplishments and success we attribute to a multiple of factors: The Association's level of maturity, its ability to provide effective representation, its reputation as a credible and accountable organization and its strong advocacy programmes