In spite of Prime Minister Skerrit's statement, Dominica needs a strong opposition, now more than ever 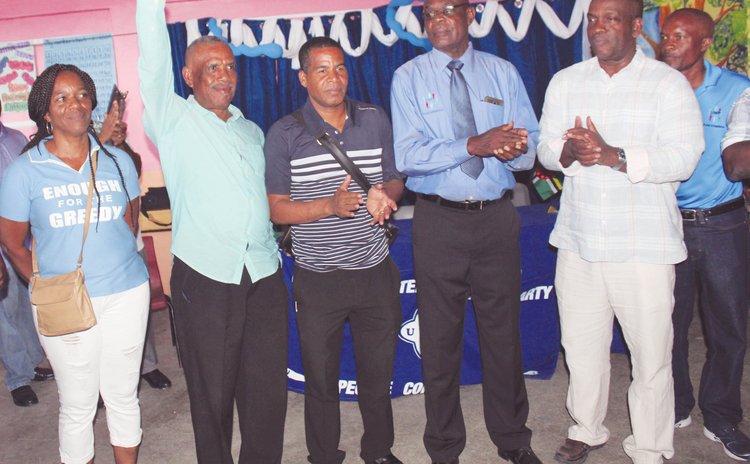 UWP executive after the 2018 delegates conference in Grand Fond

When Prime Minister Roosevelt Skerrit said during a speech in Portsmouth in early June 2018 that Dominica does not need an opposition and further the quality of the men and women currently in opposition does not meet his standards, Dominicans should take special note. Governments like Mr. Skerrit's, thankfully, do not get to choose their opposition unless we have transformed into some crazy form of government system that doesn't spell "democracy". But the press and civil society here paid no attention; we did not condemn the prime minister for his utterly contentious and purely juvenile statement.

In case you missed it, here's what Mr. Skerrit said: "This foolishness, and Grenada and Barbados have taught us so, that it is foolishness to talk about you need an opposition; we don't need no opposition in Dominica! It is…it is a waste of money to give opposition man money and he does nothing for us. Useless lazy people! Because, let me tell you, if you are a boss-man and you are the boss-man in Dominica with your vote, so you are our employers; if a man is not working for you, fire him!"

But the Prime Minister is absolutely wrong and in our view the Grenadian and Barbadian electorate will live to rue their recent decisions at the ballot box when their opposition parties won all seats. Who in Barbados and Grenada is going to ensure that their governments govern transparently and accountably- the press, the church, the trade unions and civil society?

As we stated in an earlier editorial a strong opposition, and in Barbados and Grenada the existence of an opposition, makes a much stronger government. If Dominicans want a responsible, effective, less corrupt government they need a solid opposition, now and in the future. None of that nonsense that we do not need an opposition. By opposition we refer, of course, not only to the official parliamentary opposition but also to the press, the trade unions, the Bar Association, the religious institutions, the business associations and civil society in general.

Supporting that view is Nigerian Leonard Akaolisa who wrote in a commentary in August 2017 entitled: The Role of Strong Opposition in a Democracy that the significance of a viable opposition in any democratic system cannot be over emphasized.

Akaolisa observed that in advanced democracies such as the United States of America, the Democrats and Republicans are always ready to take over the reins of power from the other in the event of the ruling party not living up to the expectations of the American populace.

In addition, Dominican Reverend Dr. William Watty expressed a similar view in an "Open Letter to the Parliamentary Opposition" published in the SUN in October 2016.

Dr. Watty believes that though the need for an opposition is enshrined in our Constitution political parties that form governments have consistently vilified the opposition because simply- they want no opposition. Prime Minister Skerrit's puerile statement gives credence to Dr. Watty's expressed opinion.

"Entrenched in our Constitution is the legitimacy of, and necessity for, a Parliamentary Opposition with a Leader who is appointed by the Head of State, without consultation with, or approval by, the Prime Minister," Dr. Watty wrote. "That important provision is the first line of defense against a potential and creeping dictatorship".

In an article entitled "Caribbean Democracy Demands Constitutional Change" our columnist Sir Ronald Sanders expressed the view that it is no accident that "The Leader of the Opposition is assigned important roles in the Constitutions of all Commonwealth Caribbean (CC) countries".

"The roles stand at the heart of the democratic values to which the peoples of CC countries adhere," Sir Ronald wrote and suggested some changes to the constitutions of countries of the region to mitigate anomalies of the recent Grenadian and Barbadian elections.

But some people have expressed the view that that essential line of defense, the opposition, has been deficient. It appears to them that the parliamentary opposition, is sitting back and expecting the Roosevelt Skerrit administration to shoot itself in the foot; they say they expect the opposition to do much more than it has been doing so far. But then, the rest of the "opposition" has not been doing much.

Take the press for instance. It is sometimes described as the fourth arm of Government (after the parliament, the executive and the judiciary) in promoting democracy and keeping the elected government accountable and responsible. But it is rather unfortunate that the current situation affecting the press in Dominica is troubling, to say the least, and all citizens must be concerned.

And, you ask, have the other members of civil society- the trade unions, the churches, the business organizations (such as the DAIC and the DHTA), provided a fortification against the erosion of our democracy? Have they demanded the absolute need for good and accountable government? Absolutely not- and they know that too.