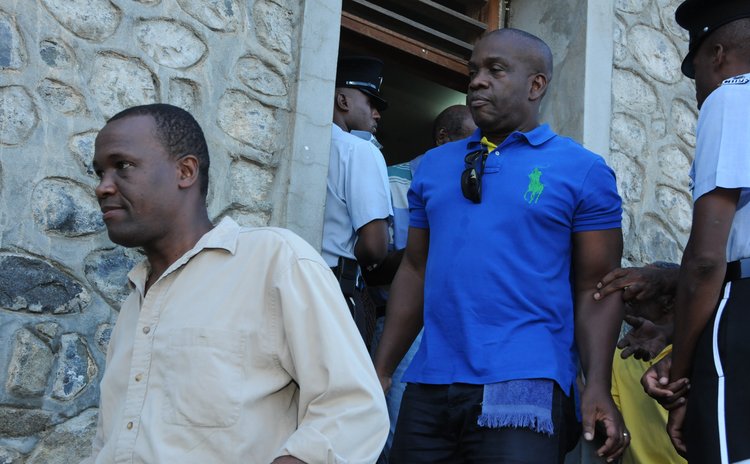 Lennox Linton, back, and Dr. Thompson Fontaine leave the court after the case at the St Joseph Magistrate's Court on Tuesday 8th December 2015

While the court moves hastily in prosecuting Dr. Thomson Fontaine on a charge of inciting violence and obstruction of justice, four years on the incitement matter of opposition leader Lennox Linton is at a standstill at the court as four Magistrates have recused themselves.

A passionate plea to the court by attorney Cara Shillingford-Marsh was unable to sway the Magistrate nor the prosecution in not setting a date of August 22, 2022, for the matter of Dr. Thomson Fontaine which, she says, greatly affects his employment as the policy adviser to the government of South Sudan, Africa.

The former UWP Senator who is on a $75,000.00 bail appeared before the court on August 8, 2022, where he was informed by Magistrate Michael Laudat that he had breached two of his bail conditions.

On April 23, 2022, Dr. Fontaine was arrested at the Douglas Charles airport on arrival in Dominica, on a bench warrant issued by Magistrate Asquith Riviere on November 22, 2018, following his failure to appear at two court hearings.

He later appeared in court on April 29, where bail was granted to him, and on May 9, the court granted a variation of bail granting him permission to travel to South Sudan.

The variation order stated that he was to report to the jurisdiction of the court on July 26, 2022, and surrender his travel documents back to the court on that date.

However, Shillingford-Marsh, the attorney for the accused, told the court that her client had breached the conditions due to circumstances beyond his control. She presented evidence to the court which showed that he was expected to return to Dominica on July 13, but his flight was cancelled and as such, he arrived on August 3.

Nevertheless, Magistrate Laudat informed the attorney that Dr. Fontaine was still in violation of the court order as he had failed to surrender his travel documents despite his late arrival.

She further contended it would have been a waste of judicial time to interrupt the court's proceedings two days prior when they were due back in court on Monday.

However, Magistrate Laudat held a different view. He said regardless if the court order was breached, upon return to Dominica, the defendant should have immediately surrendered to the court and returned his travel documents as outlined in the condition of his bail variation.

Former Chief Magistrate Gail Royer who stood as surety for Dr. Fontaine was examined by the court and informed of the defendant's breaches. Even so, she stated she would like to continue as his surety.

Magistrate then ruled that Dr. Fontaine's bail will not be revoked and will continue in the sum of $75,000.00. Some of his conditions included, that he was to surrender all his travel documents to the court immediately and must not leave the State without first applying to the court for permission to do so 72 hours in advance.

Shillingford- Marsh requested that the travel conditions be removed but her request was denied.

Thereafter, Trinidadian attorney Daniel Khan who is led by Queen's Counsel, Israel Khan as the prosecutor, requested that the matter be adjourned to the soonest available date as he revealed the prosecution's intent to proceed with the case by way of paper committal. The initial date of September 16, 2022, was set by the court; however, the defense attorney said she was unable to commit to that date as she already had another matter scheduled.

Several other dates during the months of September and October were proposed but none were suitable for Shillingford-Marsh heavy schedule. She then requested a date in December and further told the court that Dr. Fontaine was expected back at work in South Sudan.

Despite Shillingford-Marsh's plea to the court, when the option of a December date was posed to the prosecution, Khan again requested a sooner date, and as such the matter was set for August 22, 2022.

She implored the Magistrate to be impartial with his decision as according to her, "there are two sides at the bar table. The court should not seek to only please the prosecution and make a decision which is in their favour and not in the best interest of the defendant."

She asked that Dr. Fontaine's attendance at court on August 22 be waived; however, Magistrate Laudat again denied her request.

"Dr. Fontaine's job is at risk. He was given some time to travel to Dominica for today's hearing but he expected back at work. It would be impossible for him to travel to South Sudan and return back to Dominica in a matter of two weeks," Shillingford-Marsh said.

In response Magistrate Laudat said as a judicial officer he should and will not assist in the delays of court matters.

Meanwhile on the same day, when Linton appeared before Magistrate Laudat, he informed him that despite his decision to recuse himself from his matter on the last occasion his decision had to be rescinded. According to him, there are presently four Magistrates assigned to criminal matters in Roseau, three of which have already recused themselves from the case.

"If I were to recuse myself, this will not be proper to the administration of justice. It would be wrong of me to follow suit so I will do the matter," Laudat said.

In response, defense attorney Gildon Richards urged the Magistrate to remain bonded to his earlier decision, the "perfect decision," he deemed it.

"Your Honour you had most appropriately recused yourself. In supporting your decision, I'm saying that I have always had difficulty with judicial officers who have been appointed on contract acting in criminal cases," Richards said.

He alluded to the fact that Magistrate Asquith Riviere who first started the matter is no longer a sitting Magistrate and as such the matter must recommence before another Magistrate.

"Mr. Riviere who commenced this matter was also appointed on a short-term contract like you are. This matter was well on its way and the minister who appoints you and appointed Mr. Riviere did not renew his contract so he was not permitted to continue to be a judicial officer and it is on this basis that we are saying we fear the same thing will happen to you," the attorney reasoned.

Richards added: "And if you have the same fear that we do, then you may not be as fair as you ought to be in this matter. So in the interest of justice, we are humbling, asking you to maintain your decision of recusing yourself from this matter."

Magistrate Laudat adjourned the matter to December 12, 2022, to court number 1 before another Magistrate.

The charges against Linton and Dr. Fontaine stem from an incident that dates back to February 7, 2017, when the parliamentary opposition, United Workers Party (UWP) held a meeting on Kennedy Avenue in Roseau calling for the resignation of Prime Minister Roosevelt Skerrit.

Following the meeting, several businesses in the city were vandalized and more than a year later, in October 2018, charges were brought against opposition members including Opposition Leader, Lennox Linton, former Prime Minister Edison James, and Dr. Thomson Fontaine. Former Deputy political leader of the UWP Joshua Francis, along with Nicholas George and Joseph Isaac, former UWP Member of Parliament, now Speaker of the House of Assembly was charged with obstruction of justice.

While the matter against James, Francis, George, and Isaac has been adjourned sine die (without a set date for resumption), Linton and Dr. Fontaine are left to answer the charges which are still before the court.