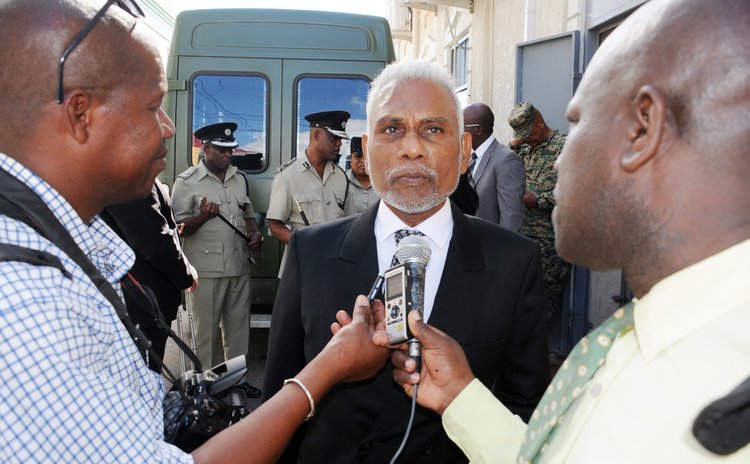 The incitement case against opposition leader Lennox Linton has encountered a stumbling block, the SUN can report.

Presiding magistrate Asquith Riviere who was hearing the matter is reported to be "ill" and has left the magistracy. The matter was scheduled to have been heard on Friday June 5, 2020 but the sitting magistrate was absent and it was not on the court's list of cases.

According to Linton, the information given to him is that "apparently it's ( the case) not on the schedule, the reason for that being given is that the magistrate handling this case is on leave or has retired or is no longer working in the magistracy."

"I am advised by counsel, that this means that the case, against me is going to have to start all over again with a new magistrate and so a decision has to be made in that regard.

"Remember that the case is being prosecuted by senior counsel from Trinidad with two assistants from a fiat from the Director of Public Prosecutions. The legal team is not in Dominica…we were dealing with the testimony of Melissa Skerrit, the Prime Minister's wife which was completed and we were supposed to have resumed the testimony of others in the preliminary inquiry," he said.

He continued, "Now, I am hearing that the presiding magistrate will no longer be able to continue; we now have to start from scratch so I now have to consider what my other legal options are since I have been coming to court on this matter since September 2018. We are now heading into two years now with this matter".

When contacted in Trinidad & Tobago for his comments on the situation, Israel Khan SC who is heading a team of lawyers from Trinidad prosecuting the matter said: "If the magistrate dealing with the matter has left the Bench, then the matter has to start de novo but I am not aware of that. My understanding is that he (the magistrate) is ill."

He continued, "In any event, the matter must be adjourned since borders are closed because of the COVID-19 pandemic so what will happen, is they will adjourn the matter until the prosecutors are able to come to Dominica."

Khan expressed surprised on hearing that the presiding magistrate had left the Bench.

"Nobody (not the DPP or attorney general) has informed me that the magistrate is not coming back. We heard from the grapevine that he is ill. I had heard that his contract was coming to an end. We are also doing paper committal so we need to look at all our legal options in dealing with it because the lawyer wants to cross examine.

"We need to do some research as it relates to paper committal to find out if a magistrate hearing a matter dies or resigns if another magistrate can take over the matter. It is going to be a challenge for us to deal with," he said.

It's been more than two years since Linton, the Leader of the Opposition United Workers Party (UWP), was charged with incitement and obstruction stemming from a public meeting on 7th February 2017 on Kennedy Avenue near Government Headquarters.

A number of UWP politicians were charged with obstruction. These included Dr. Thompson Fontaine, attorney-at-law and deputy leader of the UWP Joshua Francis; Joseph Isaac, the former UWP Member of Parliament, who is now Speaker of the House of Assembly and also contested the Roseau North seat in December 2019 for the DLP and lost; former senior police officer and secretary of the UWP executive, Nicholas George, also faced charges of obstruction as well as former Prime Minister Edison James, who was charged with obstruction and incitement. The court has discontinued the cases of all those who were charged except Linton.

Recall that prowling young men louted, burned and destroyed property in Roseau on 7 February 2017 hours after a massive public meeting organized by the UWP over apparent mismanagement of the Citizenship by Investment Programme. In an address to the nation a day later, Prime Minister Roosevelt Skerrit suggested that the opposition attempted to overthrow his government by using a truck, laden with sound equipment, to ram into the Financial Centre.

That allegation of an attempted coup has not been supported by evidence and is apparently replaced by these charges of obstruction and incitement.