Incompetence or a lie: One or the other

Was it incompetence or is it a big lie: Fallout from the controversy of Dominica's establishment of diplomatic relations with Syria 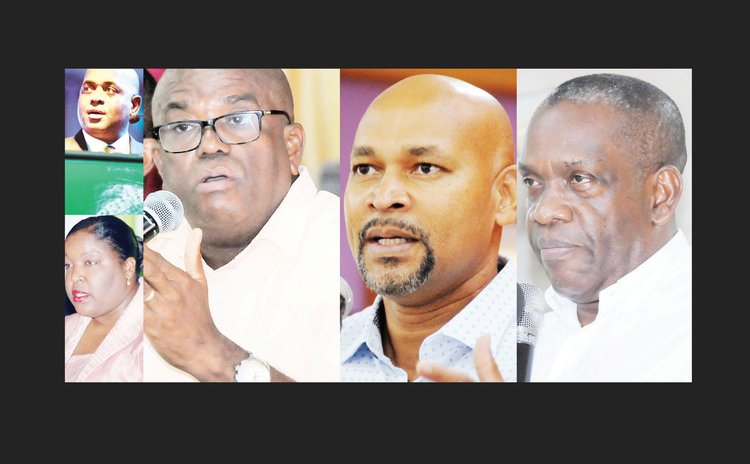 Those who dislike prime minister Roosevelt Skerrit tend to emphasize the frequency or skill with which he lies, one political observer told the Sun, and last week was no different.

"Skerrit is not a beacon of truth, we all know this, but he certainly has dropped the ball with his recent statement," the prominent individual who just last election supported the Prime Minister told a reporter.

Within the past few days, several public figures have argued that PM Skerrit's story on the signing of diplomatic relations between Dominica and Syria on March 7- to which he says he wasn't aware of until days later-has been the "pinnacle of his mountain of lies."

One individual who argues this is the Leader of the Parliamentary Opposition, Lennox Linton, who says that the evidence presented thus far indicates that the prime minister lied to the nation, to conceal his involvement in a "disgraceful diplomatic scandal."

Despite seral media reports,=including a Facebook post from government partners, a tweet from the Citizenship by Investment Unit in the office of the Prime Minister relaying the "good news;" 11 days after Skerrit announced that the provisions of the signing of the document have been suspended indefinitely because Dominica's Ambassador Loreen Bannis-Roberts, permanent representative of Dominica to the United Nations, acted without the knowledge and consent of the Cabinet, as required by settled conduct and procedure in the establishment of diplomatic relations.

Linton pointed out that Ambassador Roberts, a former cabinet minister, has been heading Dominica's UN Mission in New York since 2016 and has signed numerous communique establishing diplomatic relations between Dominica and other countries. Therefore, this makes her fully aware of the procedure requiring the approval of the cabinet.

"She knows the drill. Yet on this occasion of the reprehensible establishment of diplomatic relations with Syria, according to the Prime Minister, Ambassador Bannis -Roberts had a lapse of judgment, a slip-up?" he questioned.

According to the head of the UWP, the Prime Minister's words defy logic and if such the agreement was signed in breach of government policy and procedure, then the agreement is null void, and of no effect.

"Honesty is the best policy. The embattled envoy can speak the truth for herself to the nation that she represents the United Nations. But she has been directed not to do so," he stated.

Linton went on to note that if the Prime Minister is not lying, then his leadership responsibility for Dominica as foreign policy has been fatally compromised by subordinates and the resignation is the only honourable course of action available to the prime minister.

"The Foreign Affairs Minister lied to the prime minister in his representations on the Syria diplomatic relations issue and the Prime Minister knew, he knew, he knew that the minister lied because they have surrendered control of the foreign policy of Dominica to outside interests and are involved in a cover-up to trick and deceive the people of Dominica," Linton suggested without supplying concrete evidence.

As such, the parliamentary opposition is demanding the unequivocal revocation of diplomatic relations with Syria, publication of the instruments of revocation in the news and social media, and a public apology to the people of Dominica.

According to the DFP leader, the inconsistencies in the Prime Minister's press statement made clear either he is engaging in a massive cover-up, or the Minister of Foreign Affairs has been recklessly derelict in his duty.

He holds the view that such apparent dishonesty or professional incompetence in governance is outrageous and unforgivable.

Similar to Linton, Hurtault called on Prime Minister Skerrit to take the appropriate steps to have the agreement rescinded and properly settled.

"Given the severity of this misstep, the regional and international embarrassment, and the potential economic fallout, we question the competence of this Labour Party-led government to continue to administer this country. We also call for the immediate resignation or dismissal of the Minister of Foreign Affairs Hon. Kenneth Darroux," he declared.

Veteran Pastor, Randy Rodney also has some advice of his own from the prime minister.

Borrowing the popular slogan from the late Parry Bellot, "if I was the prime minister," Rodney stated, that he would dismiss Amabsodir Bannis- Roberts immediately without pay, stripping away her gratuity and any other benefit, as he states her actions were disrespectful to the office of Prime Minister.

If he held the post of Prime Minister, Pastor Rodney said, he would also fire Kelver Darroux, "because I sent him there as my whistleblower and he did not do his job so I would be firing him right away, go home because you did not do your job properly."

Finally, he noted, that "if I was the prime minister, I would inform His Excellency the President that the buck must stop with me and all these people knew about these things without me, even the opposition was on the radio making comments about that and I did not know, which means that I would have failed miserably my duties as the leader of these people. Hence, I would so inform His Excellency the President that I would demit office within one week of my address giving due time to the party which commands the most seats in parliament to appoint a leader and hence a prime minister."

According to Rodney, all of these actions should have been taken in the name of integrity and transparency.