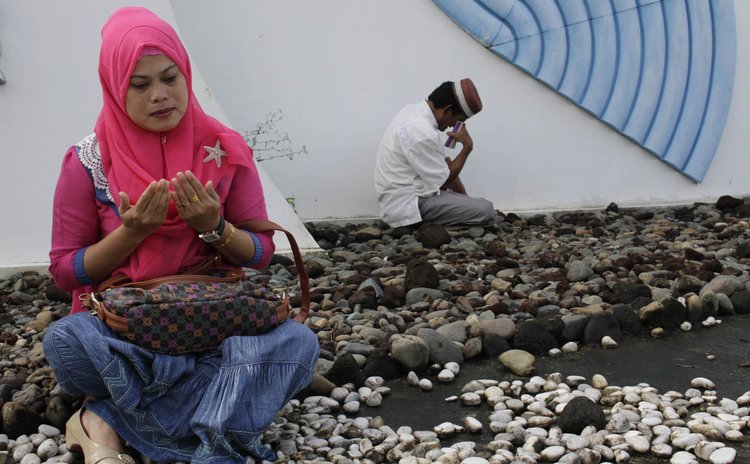 BANDA ACEH, Aceh, Indonesia, Dec. 26 (Xinhua/Sun) -- A ceremony marking the devastating tsunami that hit Indonesia the worst ten years ago was held here on Friday, featuring appreciation to donor countries participating in rebuilding and rehabilitating Aceh to what it is today.

An earthquake measuring around 9.0 on the Richter scale on Dec. 26, 2004 triggered a wave as high as 17.4 meters which swept ashore in more than a dozen countries by the Indian Ocean, leaving more than 230,000 people dead.

In Indonesia's Aceh province alone, some 168,000 people were killed, according the Indonesian officials.

Other Asian countries including India, Thailand and Sri Lanka also marked the devastating tsunami with prayers and memorial services.

"Thank you for all parties that had extended their aids to help rebuild and rehabilitate Aceh from total wreck after the tsunami," Jusuf told the ceremony held in a landmark lawn that was used to gather the bodies the tsunami victims.

Jusuf served as the nation's vice president when the tsunami took place and since led a national coordinating committee to restore Aceh.

Recalling his days to coordinate efforts to help survivors of one of the world's largest disaster in modern history, Jusuf said that international aid came very fast to respond to the suffering of the people in Aceh.

"Unity comes best when we are in dire situation. I saw people from across the country gathering aids and donations for the Aceh people soon after the tsunami occurred. I was also astonished at the international community that quickly delivered their aids to Aceh," Jusuf said.

"It was perhaps the first and the best non-combat cooperation that had ever been held by militaries from across the world," Jusuf said.

He also recalled the United Nations summit held in Jakarta ten months after the tsunami which resulted in raising fund amounting to 5 billion U.S. dollars that was eventually used to finance the rehabilitation and reconstruction process in Aceh.

Aceh was rebuilt, he said, adding that new roads, hospitals, houses and mosques were built with the support of international donors.