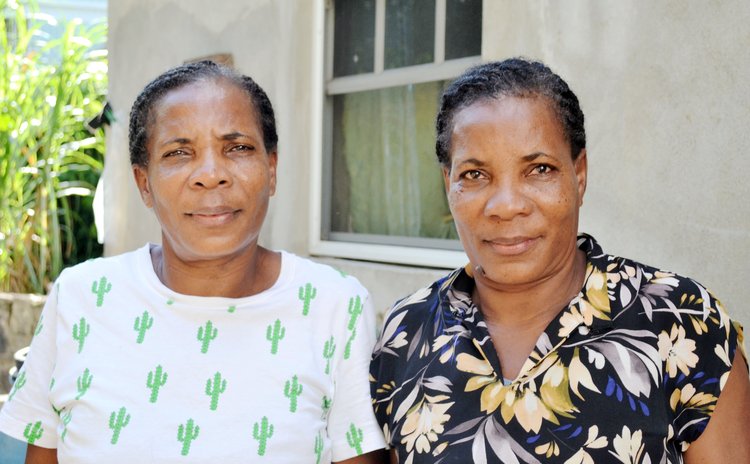 There have long been stories about the incredible connection that some identical twins share. Some claim to be able to tell what their twin is thinking, and others say they know if their sibling is unhappy even when they are apart.

But for identical twin sisters Alice Joseph Jno. Baptiste and Alicia Joseph Delsol of Mahaut, their incredible and uncanny connection have resulted in them, all of their life sharing illnesses and physical sensations, and even through pregnancy as "one will carry the stomach and the other will carry all the pain."

Speaking to THE SUN, Alice said when her sister Alicia was pregnant, an unexplainable wave of intense nausea and other pregnancy-type illness came upon her, an occurrence she stated not only happened once but throughout her sister's six pregnancies.

"At first it was strange and we were surprised but then I got accustomed to it. Whenever she was pregnant, for those nine months I knew I was in trouble because I would get the mood swings, morning sickness and odd food cravings, so I would just brace myself for what was to come but not even then I regretted being a twin," Alice said.

In most instances, Alicia said her sister would be the one to inform her that she is pregnant due to this strange phenomenon.

"Well it's good for me but bad for her," Alicia jokingly stated. "Because Alice gets all the pain and symptoms, the only time I would remember I was pregnant is when my stomach would grow but other than that I would feel normal."

Coincidentally, Alice, the mother of three said, throughout her own pregnancy she was left to bear all the pleasantries. Her sister never got the same experience as she did.

"Well for me it was like being pregnant nine times because I had all my sickness during my own pregnancy and I had to carry all of hers during her own."

The sisters say during their over 50-year connection, they are used to tackling each other's sufferings and believe the bond is a special aspect of their unique relationship.

"Growing up as a twin I think it was more difficult for my mother but for us it was very good. Whenever I [Alice] fell ill, my mother would have to bring Alicia to the doctor as well, because as soon as she came home with me, Alicia would complain of having the same pain I just had. So that was very challenging for my mother."

While some twins strive to make themselves known as individuals, Alice and Alicia embrace the mystique of being indistinguishable, and with so little to tell the sisters apart, they recalled instants when their children, parents and even their husbands struggled to differentiate them.

"Being mistaken is something we have grown accustomed to. There was a time we went to a wedding and Alice's husband came to me and asked if I'm ready to go home," Alicia said.

Alice added: "There are many times when her children have called me Mammy and vice versa but when they catch themselves all we can do is laugh."

When it comes to dressing alike, Alice and Alicia say they reignite their teenage habit only on special occasions but they always maintain the same hairstyle.

"Every time we comb our hair the same thing. Whenever I'm going to a hairdresser I tell her, [Alicia] I'm buying my braids and the same day she will buy hers as well and we will go to the hairdresser and ask for the same style. That is something we will never change."

Now the farthest they have ever been from each other as Alicia recently moved to Jimmit whilst Alice lives in Mahaut, the sisters considered themselves blessed to have two homes as a day doesn't go by without them seeing each other.

"We always tried to live close to one another so we would rent houses close to each other but now that I'm in Jimmit everyone tells me to carry my house back to Mahaut by my sister because they see every day she's by me or I'm by her. So it's like her home is mine and mine is hers so we're not really separated at all," Alicia said.

One would think that with such similar personalities the sister would bump heads off and on but Alicia and Alice insist that they have never argued as they share a deep level of understanding for one another.