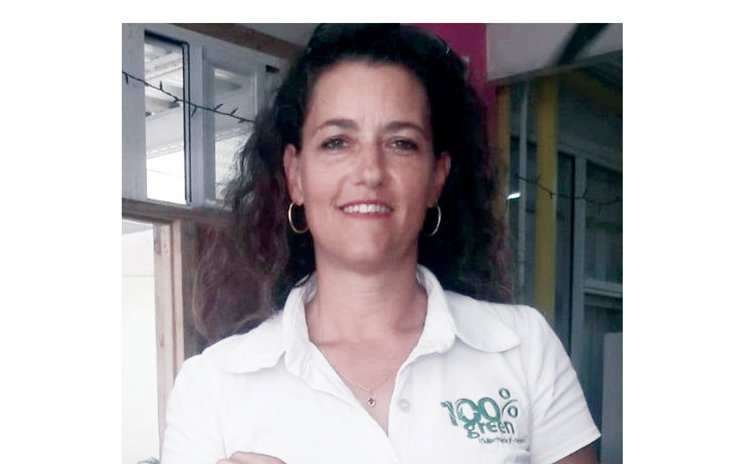 This move towards climate resilience brought the gradual phase-out of single-use plastics and food packaging material and use biodegradable material instead.

The transition, which began on 01st January 2019 led to a fixed period within which plastics imported before the ban had to be used. Importers also benefited from 0% duty on biodegradable products and 0% duty on reusable shopping bags.

However, two and a half years after the six-month phase-out, a nature lover who is passionate about seeing Dominica go green is not satisfied with the pace of change.

Nathalie Roland, a native of France, relocated to the Caribbean over twenty years ago and subsequently moved to Dominica where, in 2012, she opened the company 100% Green housed downstairs Alliance Francaise.

"We are the pioneers in Dominica for biodegradable and compostable material," she said.

Roland had always been a nature lover and her living in mainland France where the abundance of rivers, rich soil, multitudes of fruits was not so easily available further drove home the point.

She had been lobbying the Dominica government for years to "Go Green" and pointed out several positives in the movement thus far.

"There are more biodegradable products for sale in Dominica. I'm not the only supplier right now," Roland said.

To date, about ten companies have been authorized by the Dominica Bureau of Standards to sell biodegradable food packaging items.

The price of these alternatives varies greatly. For example, a pack of fifty 7oz cups could range anywhere from $7 to $16.

"There is different quality on the market, which allows everybody to find what they want or what they are looking for," Roland said.

Roland is happy with the country's effort to go greener but is disappointed that "We still find plastic and Styrofoam in some places."

She would like to see more follow-up on the importation and distribution of biodegradable products so that Dominica reaches its 2030 mark.

"I don't think we've done enough, although we say we're going to do things in stages," she said.

Roland says she spoke to the relevant authorities about her concerns.

"I brought that up to Customs and Bureau of Standards Director of Trade as well," she said.

When asked about their response she replied: "They are going to look at it, I suppose that is what they have to do."

This enthusiast for biodegradable products wants consumers to be more aware of what they purchase to ensure they are supporting the "Go Green" movement.

"Plastics are classified in categories," she disclosed. "There are seven categories, one to six are pure plastics, and number seven is biodegradable."

That number is inside the recycling arrows triangle which is usually printed on the item.

Roland is proposing one way to get rid of the unwanted plastics is by shipping to other countries.

"I mean there are companies in different islands that have recycle programmes where we can ship that stuff to," she said.

Ideally, this advocate for environmentally safe products would like to see a recycling plant developed here in Dominica.

"That can be a green project for somebody. I'm sure there are investors. Let's go to CREAD and find some investors. That's a nice project," Roland said.

There will still be plastics used in society because the country only banned single-use plastic. But that other plastic, for example in plastic bottles, can be reused, hence a recycling plant on the island would be part of the solution.

Apart from a recycling plant, "we can go much further into biodegradable" says Roland, who just launched a new line of strictly plant-based body wash and household cleaning items.

"We have the use, in Dominica, to go and bathe in the rivers, but chemicals can affect our crayfish and what is happening in the river, so my line of products is entirely made from plants so you can bathe and wash in the river and nothing will happen, and we need to save that," she said.