Is Dominica's press the Enemy of the People or Fake News? We daresay, in a way it is 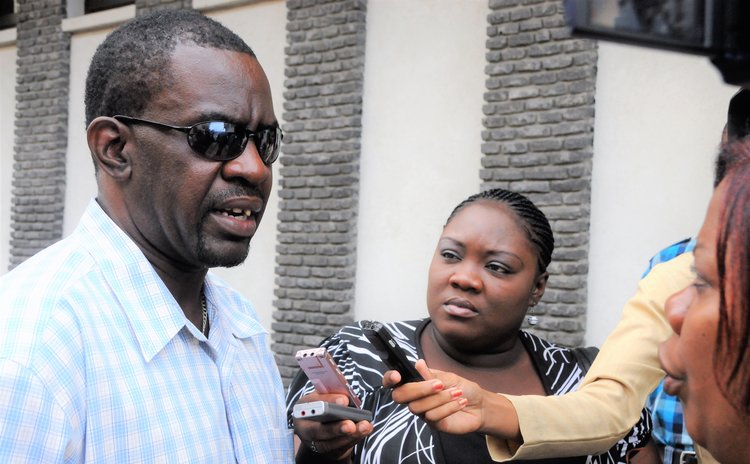 Peltier, left, speaks to press after court hearing in 2015

United States president Donald Trump has been labelling the press "the enemy of the people" because the US press has been constantly calling on the president to account for his plans and programmes and his frequent inflammatory statements especially on Twitter. Trump says the independent press, like CNN, is "Fake News". So, we were wondering whether Trump's statement -the enemy of the people- has, even remotely, any relevance to the Dominican state of affairs.

No, the Dominican press may not be the enemy of the people in Trumpian categorization but we believe that the press in Dominica has not been performing its basic function of being the ears and the eyes of the people. It never has.

As one would expect, Trump's statement has been denounced by both sides of the political divide in the United States. Before he died of cancer recently, Senator John McCain told Chuck Todd of NBC that President Trump has been acting no differently than dictators in banana republics around the world.

"I hate the press. I hate you especially," McCain told Todd. "But the fact is we need you. We need a free press. We must have it. It's vital. If you want to preserve-I'm very serious now-if you want to preserve democracy as we know it, you have to have a free and many time adversarial press. And without it, I am afraid that we would lose so much of our individual liberties over time. That's how dictators get started… They get started by suppressing free press. In other words, a consolidation of power when you look at history, the first thing that dictators do is shut down the press".

As further repudiation of the US president' attack on the press, more than 200 news editors in the US simultaneously went after Trump on their editorial pages. The most memorable commentary was presented by Claire Goforth of the Folio Weekly. She wrote:

"Our nation is being gas-lit by a two-bit huckster would-be king in a ten-thousand-dollar suit, a fork-tongued buffoon crashing about hither and thither, straddling a wrecking ball that swings between greed and narcissism, all bluster and id, swaying and shouting and preening, a lusty lothario careening and grabbing and lying … oh, how he lies. He tells lies on lies on lies—he has intended a lie and stumbled into the truth.

To wit: The king has named enemies of the mirror that reflects his pocks, the scribe who scribbles his gaffes, the jester who mimics his faults".

Most significantly, Trump's attack on the press could reverberate around the world, even in Dominica, as it emboldens politicians who detests the work of journalists. For example: in the US recently a man killed five people at the Capital Gazette in Maryland and a United Nations High Commissioner for Human Rights warned of the potential for similar action worldwide as the Capital Gazette unfortunately experienced.

"We began to see a campaign against the media … that could have potentially, and still can, set in motion a chain of events which could quite easily lead to harm being inflicted on journalists just going about their work and potentially some self-censorship," Zeid Ra'ad al-Hussein, a Jordanian prince and diplomat, told The Guardian. "And in that context, it's getting very close to incitement to violence."

But if the free press is the enemy of anything it should be the enemy of corruption and in-your-face lies and misinformation.

As Lumona Kibore, Secretary General at Social Economic and Governance Promotion Centre sated recently: "Media act as a catalyst for democracy and development, helping to make public participation meaningful. If media is honest and committed in its job, democracy is bound to function more efficiently and the loopholes present in any democratic system can certainly be plugged to the fullest satisfaction of the people.

"On the contrary, if media is biased, corrupt and favours only a particular party or few individuals, it can prove to be very dangerous for the smooth functioning of democracy".

The work that the press do is essential. Without a free press to provide a check on government, we would have little means to validate the claims of politicians. Journalists are, therefore, the key to holding our public servants accountable by exposing wrongdoing, questioning authority, probing complicated issues. Not just providing information, entertainment and education.

As US President Thomas Jefferson wrote in a letter to a member of the Congress, "Were it left to me to decide whether we should have a government without newspapers or newspapers without a government, I should not hesitate a moment to prefer the latter."

The point is the press in Dominica, including the Sun, is inadequately performing its watch-dog function; we are the "watchdog" that hardly barks when government abuses the State's resources, when the law is being manipulated, when institutions are failing to perform their functions independently.

But the press can hardly call government to account, can hardly perform its watchdog functions, can hardly fact check statements by public officials and can hardly investigate wrongdoing when, according to the report of the Commonwealth Elections Observer Mission, it is alleged that most radio outlets in Dominica are owned or controlled by Government or by Government's sympathizers.

"The media does not appear to be balanced and fair in their coverage of news worthy events: certain media houses have established relationships with certain political parties and exclusively publish their content," said the Mission in their report.

So, using Trump's terminology, is the press in Dominica "the enemy of the people" or "fake news"? Not really, but you get the point.