Is Government stifling dissent by using the Court? 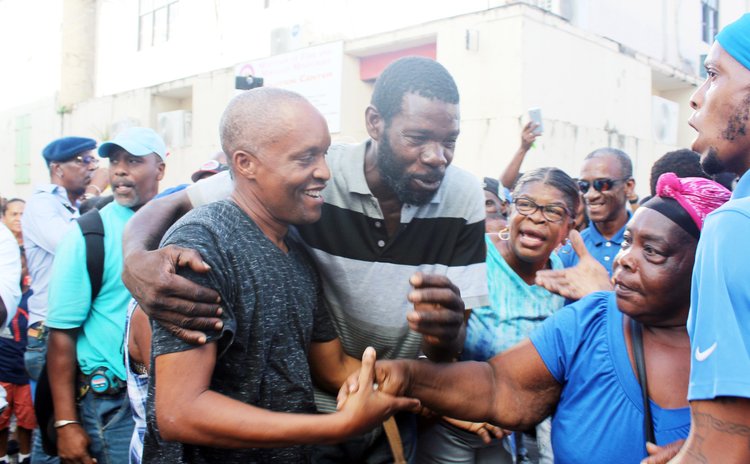 Supporters hug Spags John after he was released on bail

With the arrest last week of parliamentary representative for Salisbury and former leader of the opposition Hector "Spags" John, the Roosevelt Skerrit administration gives the impression that it is using the court of law to stifle dissent.

John is the latest opposition politician to be charged for incitement during the past few years.

John, who was released on $10,000 bail at the Magistrate's court on Friday, told reporters that the government was trying to silence him.

"They will not intimidate me. I am an advocate for open, transparent and accountable government," he said after the arrest. "Today gives me more energy to move on… they will not deter me, they will not distract me."

John added: "Dominica is in a serious place right now and we all have to ask ourselves-can we speak in our country?"

"I am very confident that the document that the prosecution presented does not disclose any offence that is known to the law," said Cara Shillingford.

John is accused of incitement because of statements he made at a United Workers Party (UWP) meeting in Lagoon, Roseau on Friday 6th September.

John allegedly said: "Roosevelt Skerrit, this is my last time I am coming on the platform asking you to tell us about the money…you will be hearing about Hector John. You will not be seeing me; I will not be speaking anymore. I am going to tell you something before I leave, don't think that you will call the elections without electoral reform; you will have civil unrest on your hands. Good night and God bless," John said.

Meanwhile, the court's decision in a case of incitement against Opposition Leader Lennox Linton is pending.

Linton was charged with incitement and obstruction stemming from a public meeting on 7th February 2017 on Kennedy Avenue near Government Headquarters called over the management of the Citizenship by Investment programme and the alleged sale of diplomatic passports to persons of questionable character. Dr. Fontaine has not attended court hearings because he has been out of State, working as an economist in South Sudan; a magistrate has issued a bench warrant for his arrest.

Former Prime Minister Edison James, who was charged with obstruction and incitement, was not properly served so he too has not appeared in court.

Martin's incitement charge is linked to a call by Martin for people to block the road in the area near McMillan gas station on Castle Street, Roseau, to protect themselves from the flow of traffic during a Concerned Citizens Movement (CCM) organized demonstration, to promote electoral reform, on 15 December 2018.