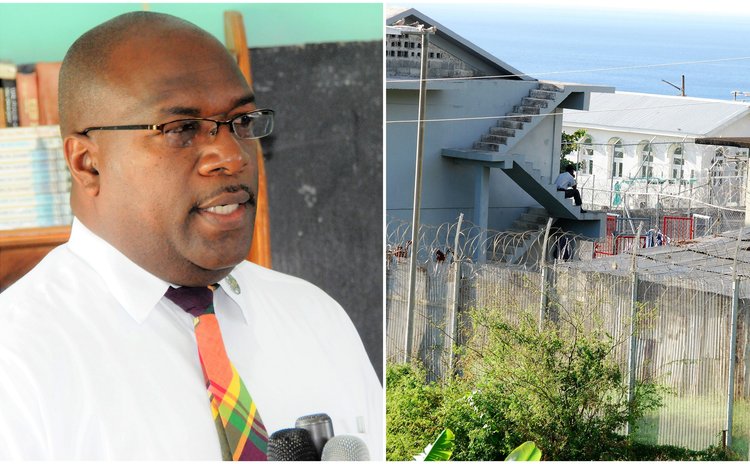 Shane Edwards, who has been jailed at the Stockfarm prison on several occasions, claims that the Dominica State Prison (DSP) is unhealthy and calls for an investigation in a five-minute video.

"The place is untidy and the food is garbage," Edwards said in the video "The toilets are in a mess, you have to fill containers with water to flush the toilets, and this place is just not healthy for those of us and others in the prison…I was at the prison and it's rough".

He added: "There like a human garbage dump. You are next to Labasse and that smell killing you, making frustration at the Dominica State Prison even worst. I can't keep quiet anymore."

"If the place was so bad Shane would have stayed away from that place," Jean Jacques said in response. "I inherited certain things at the prison and I am trying to bring improvement for inmates and officers. We are on a drive to improve and modernize the prison. Shane is looking for recognition and I will not afford him that." Clem John, chairman of Visiting Justices Committee of the DSP declined an invitation to comment on Edwards's allegations.

Nevertheless John used the opportunity to inform the Newspaper that his committee meets every second Tuesday of every month and also at the request of the Prison Superintendent.

"Our emphasis is on the welfare of the prisoners and prisoner officers. From what I have seen the prisoners (some) are well behaved. The prison is a small community with just under 300 inmates all with different minds, character and personalities who always believe that they are innocent and were framed," John said.

However, he is concerned about the length of time inmates spend on "remand" awaiting trial.

"The wheels of justice turns much too slow. We also have some fine lawyers (inmates) at the prison who know the laws well," said John, smiling.

However, defense lawyer Peter Alleyne says the conditions at the DSP is not the best and it leaves a lot to be desired.

"The prison is now housing more remand prisoners and inmates than it was built for, so there have to be some crunch for space at the facility and is human beings we are dealing with," Alleyne said. "The resources in the prison are limited and it will always be the prisoner that will suffer the consequences of that shortfall. But you have to remember that you are not at a hotel".

Meanwhile, Jean Jacques has confirmed that during a recent routine search prison officers found drugs in cells of inmates as well as seven cell phones.

"We have lodged an investigation into the matter; I will say no more on that," he said. "We have had a number of drug seizures. During the weekend lots of marijuana comes into the prison via the fence all the time. We are able to intercept some of it and some will slip us. It's a constant fight. We have inmates who when discharged send it over the fence for their friends inside. We have to strengthen our fences and our buffer zones".