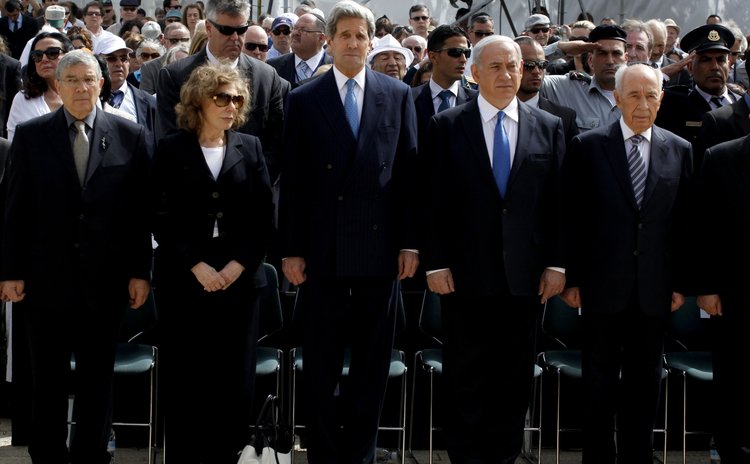 Kerry, US Secretary of State, centre, and Israel officials

From Sunday evening to Monday Israel will officially commemorate the six million Jews who were mass-murdered by Nazi Germany in the late 1930's and early 1940's during World War II. The annual ceremony on Sunday evening was held at the Yad Vahsem Holocaust memorial museum.

Prime Minister Netanyahu, who spoke about the tragedy, compared the manner in which the world powers have overlooked the Nazis' emergence to power in Germany in the 1930's and "failed to act" to the imminent threat he said Iran had posed over Israel.

According to a study of anti-Semitism published last year by Tel Aviv University's Kantor Center for the Study of Contemporary Jewry, while violent anti-Semitic attacks have declined in the past year, overall anti-Semitic sentiment is on the rise.

It reported that a third of the respondents, Jews living in European countries, are contemplating emigration as a result. It also said that 66 percent of those who were surveyed reported anti- Semitism as having negative effect on their lives.

On Monday morning Israel's government will participate in a wreath-laying ceremony at the Yad Vashem museum where names of Holocaust victims will be recited and a two-minute siren will be heard throughout Israel.

On Sunday morning Palestinian President Mahmoud Abbas made sympathetic statements regarding the holocaust, calling it "the most heinous crime to have occurred against humanity in the modern era." He also expressed sympathy for the families of the victims.