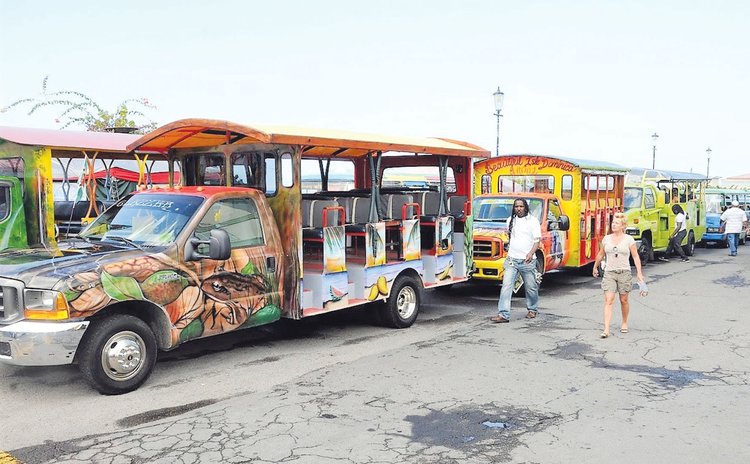 Tour vehicles on the Dame Eugenia Boulevard in 2016

Three months before the onset of the coronavirus pandemic, Andy Hogan built a brand new safari vehicle – his second – for his Lion Tours Safari. The cost: $160,000. At about the same time, he bought a luxurious coach at a cost of $80,000.

Today, they stand idle outside his home in Warner, covered by tarpaulin to shield them from the elements.

"It hard, oui," Hogan told The Sun in summing up his current predicament.

Clearly bullish about the immediate future of the tourism industry, Hogan invested heavily in the ground transportation business. In addition to the safari vehicles, he owns two buses and a car for hire – it too stands idle outside his home.

This is what he has depended on to pay his monthly mortgage of $3700 and to feed his wife and three sons, ages three, five and nine. But with the collapse of the cruise sector due to COVID-19, Hogan's life has been turned upside down.

In order to try to make ends meet, Hogan rents out two apartments in the basement of his home, and, having not offered passenger services for many years, "right now I have to go down the road to see if I can make a little $100 just to patch up, at least".

It's been nearly a year since COVID began to inflict its mean streak of misery upon the Dominica population. At first, Hogan was troubled by the lack of economic activity, but it has failed to break his spirit. He often discusses their plight with his family and they've accepted that the crisis is not of their doing. Still, he can't avoid the realities of massive debt and fading hopes that confront him.

Like Hogan, Jonathan Vidal has seen his business dry up over the past year. His five vehicles -two 29-seater coaches, one 16-seater bus, an SUV and a minivan – are also lying idle. Even the occasional business from schools and local companies has vanished.

"Because we don't have ships coming in, the ferry doesn't come in from Guadeloupe, basically, limited travel per se, there is no work," Vidal told The Sun. "There. Is. No. Work."

The last time the ground tour operator had steady work was in March of last year, shortly before the country shut down. Since then, he might get a call here and there – he was due to go to the airport on Sunday to pick up his brother – but nothing to take to the bank.

"My big concern is that there has been no reaching out to us, our industry just died overnight. There is nothing going on for the drivers and operators," said Vidal, who called on government to offer the industry a stimulus package to keep them afloat. "Fortunately, you're in Dominica, so you won't starve, but making money is out of the question in this industry. It's not working out."

Across Dominica, taxi and ground tour operators are facing a fate similar to that of Logan and Vidal as the pandemic continues to keep cruising at bay. Neither Carnival nor Royal Caribbean, the two largest lines cruising Caribbean waters, has determined a date for the return of guest cruising operations from US ports. They, along with all cruise lines, are awaiting word from the US Centres for Disease Control and Prevention on test sailings to assess their ability to mitigate the risk of spreading COVID-19. At the same time, arrivals at the Douglas-Charles airport are at a trickle.

This lack of activity at the ports has left more than 400 drivers and operators who depend on the industry for a living, facing financial hardship. This is taking a toll, not just on their pockets, but emotionally, according to Jenner Guiste, president of the Dominica Combined Taxi Association, the umbrella body of taxi and tour operator associations.

"It has affected their lives at home - not being able to provide as they would have liked, not being able to meet their commitments; it is taking a toll on them," Guiste told The Sun. "A lot of them are in trouble. One of the taxi drivers said to me he is not even able to sit at home and have a happy conversation with the family. It has demotivated even his sex life."

Even as all safari vehicles and tour buses remained grounded, the largely unemployed drivers and operators must still pay between $800 and $1300 per vehicle in licencing fees to government. An appeal to the authorities to suspend the fees has fallen on death ears.

Oris Campbell, president of the Dominica Taxi Association, believes as many as three in ten of the 60 active association members are likely to be forced out of business by the current state of affairs.