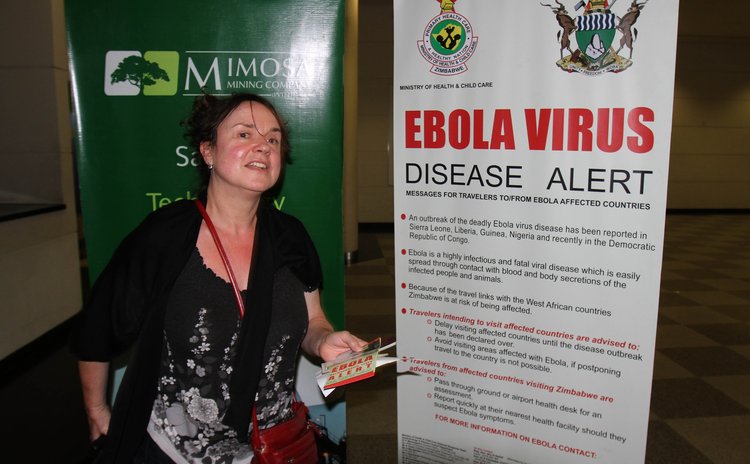 HARARE, Oct. 6, 2014 (Xinhua) -- A passenger holds a pamphlet on ebola prevention as she arrives at Harare International Airport, Zimbabwe, Oct. 6, 2014

ROME, Nov. 30 (Xinhau/ Sun) -- An Italian doctor who contracted the deadly Ebola virus in Africa is struggling in a Rome hospital, where doctors are treating him with experimental drugs in attempt to keep the raving effects of the virus at bay.

Italian media coverage, according to experts, has been calm and even-handed, in contrast to coverage of the first Ebola patient in some other countries.

"It's encouraging to see that Italian media coverage of the disease and the patient has been factual rather than polemical," Franco Testa, a media affairs expert and author at University of Bologna, said in an interview. "When the first Ebola patient arrived in the U.S., the media helped spark fears it would spread and calls for flights from Africa to be halted. In Italy, this panic has been avoided."

The patient, a 50-year-old Sicilian doctor who was working with an Italian humanitarian organization seeking to combat the disease in Sierra Leone, contracted the disease in the field and was flown back to Rome for treatment in a specially sealed military aircraft.

Doctors at the Lazzaro Spallanzani Hospital in Rome at first reported the patient, who has not been named, responded well to experimental treatments. Emanuele Nicastri, one of the patient's doctors, announced in a media briefing Tuesday the patient was "alert, collaborative, and able to walk."

Since then, however, doctors said his condition has worsened, with reports from Saturday indicating he was starting to suffer from intestinal issues, like vomiting, nausea, and diarrhea, and that he was running a high fever.

In early November, Italian doctors called for quarantine for everyone arriving from the Ebola-stricken parts of Africa, warning that each arrival "poses a risk of being a Trojan house that could cause a tragedy." But immigration policies were not changed.

Instead, media coverage has been remarkably calm since the Sicilian doctor arrived Tuesday.

"Between war, earthquakes, terrorism, the Italian media has experience covering tragedy," retired university sociologist Aldo Firenze told Xinhua. "Obviously, precautions are being taken, and it is a help that the media doesn't exaggerate the risks."

Ebola is spread by direct contact with blood or other body fluids from an infected person or animal. The disease has been known since the 1970s, but an outbreak started early this year in Guinea, and the disease is now present in six countries in western Africa. By the latest count, Ebola has claimed nearly 5,500 lives.

In recent months, some cases have started to appear in other parts of the world, usually transmitted by infected people traveling from one of the six infected countries in Africa. Tuesday's arrival is the first in Italy.

Despite the worsening condition of the patient, doctors say they still hope he can recover.