"It's time to take action" 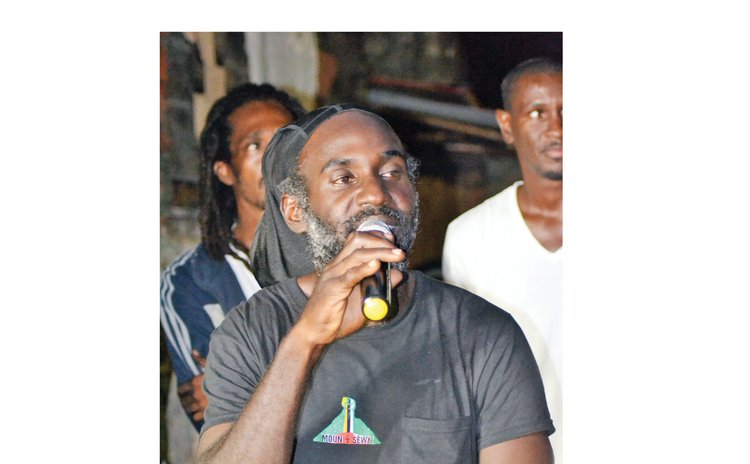 New faces are joining the age-old fight here in Dominica, but instead of the usual talking, these newcomers are ready for action.

At a recent 'We the people' public meeting held in Lagoon, the message from one of the brothers of Moun Sèwyé, Kashma "Buju" Richards was penetratingly clear that it's now time for the people to unite and fight to get this government out of office.

"We have to take what's happening in this place very seriously," he said. "We have to prepare ourselves for what is to come, my people... we must move together as a people right about now to rescue our country. We have to leave down the fear that the leaders of the past have tried to instill in us and we must step up to the fight."

Richards went on to lament the number of times the government has not upheld the constitution and called on the people to rescue the country from those who perceive that they are above the law.

With his fist in the air, he stated, "We should not give them another budget to steal our money. We must get them out of office this year my people. We have one goal to accomplish, Labourites and Workers working together. we will stop the victimization, we will stop the disorder, we will restore law and order in high office and we will get back respect to the name of Dominica."

The activist sounded a call to citizens to prepare themselves for the war ahead, noting that it will be tough but in the end, victory will come.

Fed up with the lack of development, the high unemployment rate, lack of investment in education and sports, Richard pointed out that the only way to rebuild the economy from the ground up was to get the Skerrit regime out.

"These people work for us and we must demand that they resign from office and that is the mission right about now," he stressed. "The end game at this point is to have the government resign my people. Prepare yourself. Workers in hand, Labourites in hand we have a country to protect and save and I am ready and willing to lead this fight."

Acknowledging Dominica's successes with protest in the past, Richard emphasized that the line has been drawn in the sand and the only way to accomplish change is to shut down the country, lock it down and demand that the government and everyone associated with them to "get the hell out."