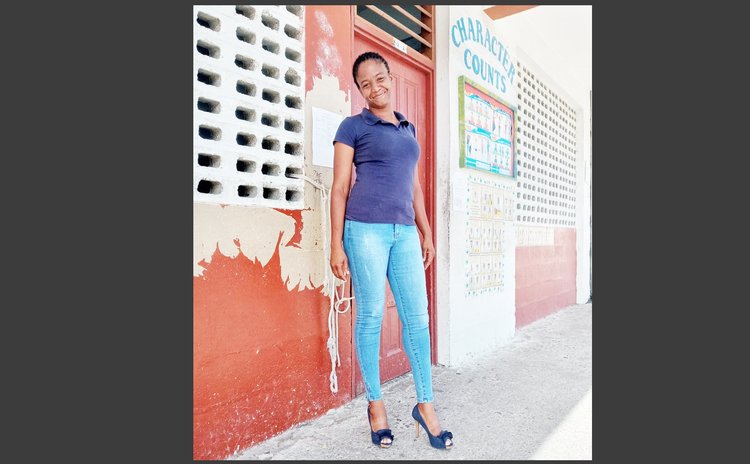 Ms. Roberts at the ITSS

Another term is drawing to a close and teachers at the Isaiah Thomas Secondary School (ITSS) are still not fully back in the classroom.

This is because the educators at the government school say their request to have an in-person meeting with an official from the ministry of education, or the Prime Minister, has yet to be fulfilled.

As previously reported by the Sun, based on the new organizational structure for secondary schools, which took effect at the start of the 2021/2022 school years, the cabinet approved the upgrade of seven positions of principals of secondary schools, as well as the creation of 15 deputy principals, 7 assistant principals, 87 heads of departments, 28 senior graduate teachers, 70 senior qualified teachers, and 16 school counselors.

As such, the position that Miss Kendra Roberts held as vice-principal, was made redundant which meant she had to apply for the role of deputy principal, which she did and she was interviewed.

However, last month, news broke that Roberts was not selected for the job, or any other at that which meant that she would return to her previous role as a teacher, which sparked outrage.

Having written several letters to the relevant officials including the Prime Minister to no avail, over the past few weeks, the aggravated teachers, instead of being in the classrooms, have sat outside of the schools' office and last week took further actions to did not show up to the school.

One of the teachers told the Sun that they recently received a letter from the permanent secretary in the Ministry of Education Chandler Hyacinth, stating that we should let her [Ms. Roberts] go and spread her wings and all positions are not yet filled, and Ms. Roberts's own is there. They are waiting for some finalisation".

The teacher who chose to remain anonymously also alleged that Hyincth promised to meet with them last Wednesday, but did not show up.

The Sun has made attempts to speak to Roberts- who's presently on leave; the current principal of the ITSS, Benedict Charles, officials from the ministry of education including the minister, the permanent secretary, and acting Chief education officer, but all attempts have been futile.