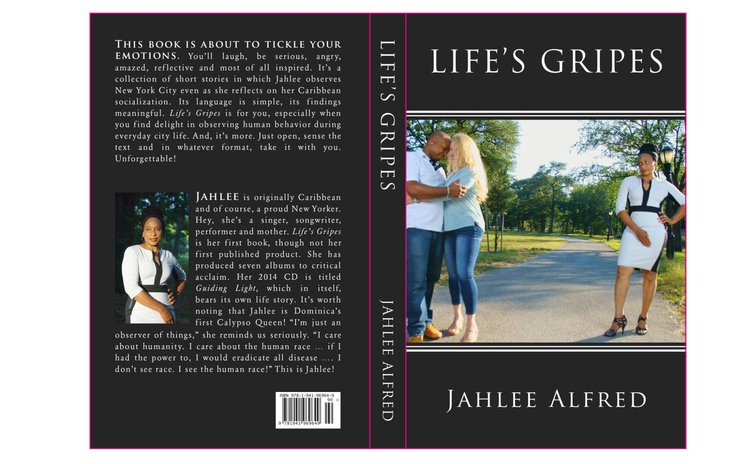 Back and front covers of Alfred's book

Her gripes are many and she has no problem expressing them, shouting them sometimes. With her face near your face, her face hugging your ears.

"Hey! Hold your horses, don't jump over my pony tails," she says loudly to people who use cell phones while they drive.

Then she tackles "sex" – everyone's favourite topic, she says, unless you have ice water instead of warm red blood running through your veins.

"Let's first take a stab at the male species (men)…I can hear you now 'this woman is crazy'. Yeh, yeh whatever! Crazy I'm not."

Ladies and gentlemen, that's a taste of Jahlee Alfred in her book "Life's Gripes."

There are 85 gripes in Jaylee's delightful 295-page book. Taken randomly, they range from nose pickers to morning breath to bitches and ho's to baldness to fatso to black blonds to, You bitch!

OMG! Has Jaylee's lost it?

Not really- she just knows how to express herself. Dominican communications expert, Steinberg Henry who wrote the foreword, called Jahlee la flaneuse, the female.

In her personal note to introduce the book Jahlee begins: "OK SO YOU picked up this book, novel or script-well whatever you choose to call it. And then you ask yourself: Who the heck is Jahlee? What are all these gripes about?"

And these gripes, Henry says, Jaylee describes as "things people do every day along the way, annoying things that really bug the heck out of you and me".

Dominicans know of Jahlee from "South City"-Grandbay and the woman behind the 1987 hit such as "Sweet Tempo" and "Life is Your Rights". She was Dominica's first Calypso Queen.

Just before Carnival 2016 Jahlee returned home to participate in the first ever Calypso Queen Competition and to reconnect on the big stage with her fellow competitors from 1987.

Jahlee told the Sun that her first book is not conventional and it comprises of 85 short stories.

"It is a book that depicts the things that people do subconsciously and maybe consciously too but sometimes they don't care and it affects other people," she said.

Alfred said the book took about four years to compile because she was not eager to have it published.

"I used to take the train every morning to work I had my pen and paper…I wasn't in no rush to get it out, until I sent what I had to a very well-known Dominican- Steinburg Henry- he read it and was very impressed and thought that I should really get it out there," she said.

She added that it's a book that the reader will not have to wait till the last chapter to get the climax.

Jahlee stated that there's a climax in each of the 85 short stories she presents in the book.

"It is fun, it can be rough a little bit because it's in your face, no holding back and I am hoping that people will find something to laugh about," said Alfred.

In addition, she said that she is already in the process of writing her second book entitled "Why Men Stray and Women Stay".