James gets PhD in Computer Engineering 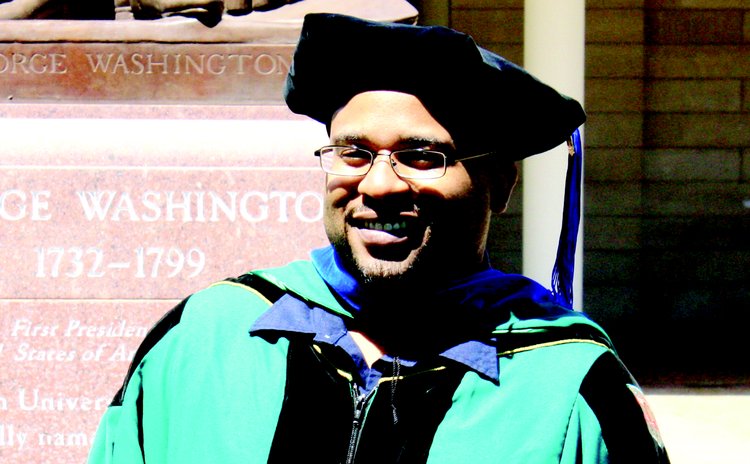 Brad Henry, the 26th Governor of the state of Oklahoma, has stated that "Families are the compass that guides us. They are the inspiration to reach great heights, and our comfort when we occasionally falter".

Dr. Shakir James, 31, would totally agree with Governor Henry; the Dominican graduate told The SUN that family support was most important on his journey in obtaining his doctorate in Computer Engineering at the Washington University in St Louis, Missouri in December 2012.

"(When I was younger) I did not see the benefits of education, but my mother was the one who always pushed and said I had to go to school. I never really thought I would have gone that far, because I always felt that I could just stay in Dominica and start my company… and do well," he said. "It is a good thing that I followed her advice".

Computer Engineering is not simply putting different parts of a computer together. It involves the use of hardware and software to build systems that achieve a specific goal, Dr. James told The SUN. His area of specialism is computer networking. Using programmable computer hardware, he designs and builds systems that transfer data quickly and efficiently.

"Most of the companies of today – Facebook, Twitter and Amazon- have warehouses of tens of thousands of computers and in those warehouses they transmit data from different computers quickly. So my thesis, my research was on how you speed up that transfer of information in those data centers," he said. "So I built a system that could make it work fast. To do that, I used some ideas that existed on the Internet and I built a system that could do that for these large companies.

"The state of the art at the time would take an hour to distribute say a large file within those data centres, and I developed a system that could take it down to two minutes. That was one of my projects."

James attended the Convent Prep and the Dominica Grammar School (DGS). One of the programmes that the DGS offered when he attended that secondary school was information technology. "My Dad bought us a computer when we were very young and that course at the DGS really got me more technically involved in computers. And since then, I have been focused on computing," he said.

After leaving the DGS in 1998 and the Dominica State College, he taught at the DGS and worked with a web design company. Then he took up an offer at Midwestern State University in Texas for three years majoring in Computer Science and Mathematics, where he graduated with the President's medal for the highest GPA in the school of Science and Mathematics. Afterwards he moved to Dallas where he worked for a year with a web programming firm, building web applications for companies like AT&T. Then he moved to St. Louis, for 6 1/2 years, where he pursued the Masters and PhD degrees.

Assessing his accomplishments, Dr. James used the analogy of the marathon versus the 100-metre dash. He said many people do not make it through that rigorous programme for the 10-year period of studies mainly because it is a major sacrifice in your life; it is not about just being smart, but it is about being disciplined enough to stick with it.

"At this point, although I am officially done with school there is no way I am done with learning," he said. "Education at that level makes you realize that there are lots of things you will never know and never understand; and so it gives you more of an appreciation for the breadth of human knowledge. I think it is a humbling experience, honestly, for you see how little you really know in such a large body of knowledge".

Asked about her son's childhood, Mrs. Denise James, a teacher at the DGS for many years said that from an early age Shakir was extremely focused.

"He was also very independent; he didn't want help. So he was always determined to do whatever he wanted. When he was preparing for the Common Entrance Exams, he told me, 'please don't do any work with me. I will do it myself', and he got a scholarship. It was the same at the Grammar School. All I did was to pray that God would always guide and direct him.

"His achievement of attaining his doctorate was not a surprise. He did not surprise me because he was always focused. Shakir's teacher would give him five Maths problems for homework and he would work at 15. And I would have to say to him, 'that's enough, go to bed. "I never wasted time or effort or money on him; I knew whatever I put to him I would get his best, and he has not disappointed us. He has done well and I am proud of him".