Janelle Owoeye: "He taught us to believe in ourselves" 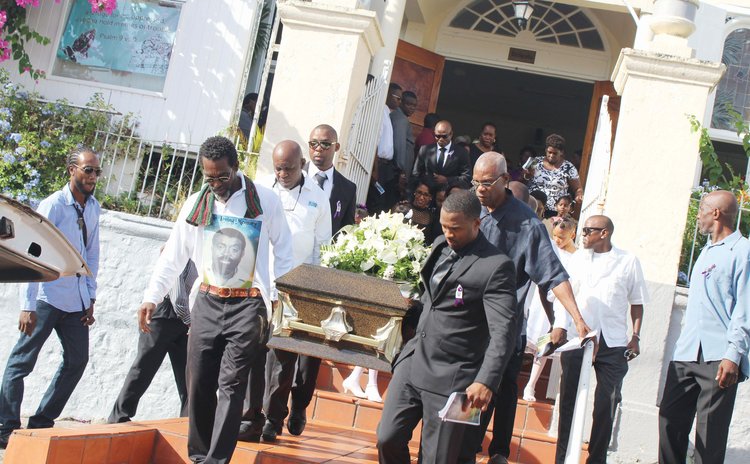 My name is Janelle Owoeye the daughter of Osborne Alec Gage. My brothers (Imran, Jhawanie) and I are very grateful to see families and friends join us today to celebrate the life of our father.

In appearance today are also the seven wonderful grandchildren (Victoria, Alexis, Nicole, Kamiah, Jharrissia, Jayanie and Dante) who my father loved so dearly.

Osborne Alec Gage was born to Alexander Gage and Jane Allen on May 15, 1942 in Roseau, Dominica. He was the last child of three boys and was referred to as "Mummy's Boy" because of his charismatic nature. He was born in Pottersville, raised in Newtown and settled in Bath Estate. He attended the Roseau Boys' School and upon completion immediately entered the workforce. He held a number of jobs including at the Ju-C Factory and Bailiff at Courts Dominica Ltd. but where he made his name was at the Waterfront and Allied Workers Union (WAWU) where he served as a member from the early 1970's to the early 1990's. During that stint, he made a big impact and contributed tremendously. He came in contact with the so called "big names" in society when he represented his clients' rights against their employers and came out victorious. Some of the cases are still being talked about today.

As a unionist, my father visited countries to include Russia (his fondest memory), Great Britain and Cuba, as an ambassador of Dominica; to seek neighboring government support in order to better the lives of Dominican citizens. He was also responsible for expanding the base of the Union making it the force it was.

The most memorable moments about my father was his relentless desire to care for his entire family and to ensure his children visited different countries in order to gain better perspectives about the rest of the world. My brothers and I travelled to many countries with our father and gained insight on different cultures; understanding that life is what you make out of it.

He was one who loved and was proud of his name. Indirectly he taught us to believe in ourselves despite the situation, as life has ways of throwing road blocks. But by believing in one self, you are able to adapt to all situations.

His sacrifices to his family and country will never be forgotten. His memory will forever remain in our hearts as we journey through life with the hope that we shall see each other again.

Thank you for your time and support. My brothers and I will forever be grateful for blessing us with your presence in celebrating the life of our beloved father Osborne Alec Gage. May God continue to be with you all! Thank you.