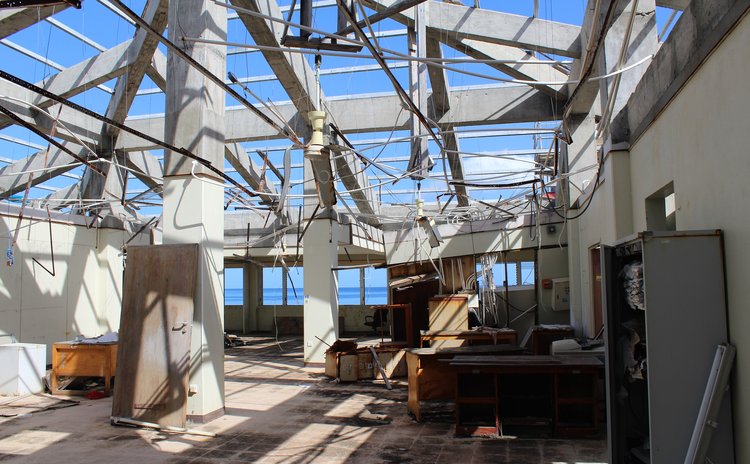 Fishers and users of the Roseau Fishers Complex located on the Dame Eugenia Boulevard in Roseau want Government to speed up the rebuilding of the facilities after its devastation by Hurricane Maria in September 2017.

The fishers say they are disappointed that not much is being done to repair the building almost one year after Hurricane Maria.

"I have lost my job working in the fisheries department," one former member of staff at the Complex said. "It is very hard and difficult for me; I now have to try to get another job."

Presently, just three fish vendors are doing business in the area and they complain that they now have to drive all the way to Marigot once a week to get crashed ice to preserve their catch.

"It is costly for us…gas and transportation and this has to be done every other week. Before we had all that available to us here," the vendor said.

The Roseau Fisheries Complex was Japan's first "gift" to Dominica built at a cost of $12m (£8m) in exchange for Dominica's controversial vote for Japan at the International Whaling Commission about two decades ago.

"It is a highly visible status symbol. In 1999, however, its ground floor was swamped by a hurricane and expensive equipment was wrecked," wrote Polly Pattullo in an article in the Guardian in July 2001 entitled "A little fish with a big vote to cast".

In 2001, Dominicans were deeply divided by the whaling issue and the Government's acceptance of these gifts from Japan despite its nature island image.

Atherton Martin, the former minister for agriculture and fisheries resign over the whaling issue, in a direct response to his Government's support for Japan at the IWC. He was also the president of the Dominica Conservation Association (DCA) and a board member of the International Federation for Animal Welfare (IFAW), a member of the then anti-whaling lobby.

Meanwhile, Dr. Reginald Thomas, Permanent Secretary, acknowledged that the Roseau Fisheries Complex was extensively damaged and is to be assessed by the Japanese.

"They have already done some preliminary assessment work as to the cost of repairing the building and we expect another team of them to be back on island in the middle of August 2018. So as soon as we have details of what is going to happen we shall release that information," Dr. Thomas said.

He also disclosed that all the equipment in the building were damaged by the storm and so new equipment will be needed.

"It's a process which is taking some time but we have no control over it. The entire roof of the complex was gone and so all the equipment and machinery have been totally destroyed…so all that must be factored in," he said.