Jarret Jean Jacques: Music is just so fun for me to play 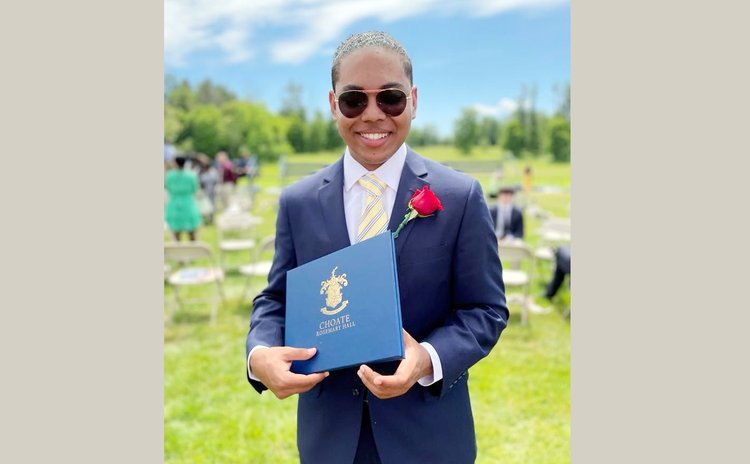 With his graduation certificate, Jaret Jeanques

A talented musician, who knew from early on that his passion and career lay in the field of music, is fine-tuning his skills to give back to his country.

18-year-old Jarret Jean Jacques recently graduated from the Choate Rosemary Hall Boarding School - one of the most prestigious boarding schools in the USA – with its highest music award, the Hicks Lawrence Prize for music excellence.

He told The Sun his love for music developed at the age of five when he was taught music at home because he was too young to attend music school.

"My two older sisters, Stacey and Stephanie, started me off with piano," he said. "Then when I was six, I started trumpet, which is my main instrument. Between the ages of six and ten things just spiraled forward because I realize that I had a passion for music and I pretty much just added one instrument after the other."

Accomplishing so much at a young age, Jarret says high expectations of him are the norm, and he uses this to drive his success.

"I realize, as I continue to grow, people are going to have expectations of me which means I have to keep working harder to better myself so that I can reach my full potential and continue to impress those around me," Jean Jacques said.

While at Choate, he was part of the many different classical music ensembles, which further deepened his love for performing and learning the orchestra instruments.

"I traveled with the school's ensemble to Washington D.C where we performed at the John F. Kennedy Centre for the Performing Arts," he said. "That was the first real experience of what I wanted my career to be. It was just surreal for me."

For Jarret, it's now to the Eastman School of Music, University of Rochester - his dream school - to pursue a bachelor's degree in music education.

"I heard about Eastman during my first summer at Choate. I applied and was accepted into their classical studies summer programme. I continued doing lessons with the professor - throughout my last year at Choate, who happens to be the professor I will have for the next four years," he said.

Upon completion of his bachelor's degree, Jarret would like to pursue a master's degree in the same field. However, his overall vision and purpose are to share his love for music through teaching.

"Being able to perform and tour with my own ensemble is also something I could think about," Jean Jacques said. " But at the end of the day what I want to be able to do is teach and most likely come back to Dominica and set up a school where I can help people learn music. That is my main goal."

Having spent a lot of time in Dominica's music education system, Jarret is well poised to give advice on how he would like to see the artform treated in the country. "The popularity aspect of it is the biggest issue, where people see music as this side hobby," he said. "I believe arts and music, should have as much importance as the other main subjects like math, language, etc."

Reaching this level of skill and knowledge, people may wonder if this musician ever feels he will burn out or lose interest in the field, he confidently assured The Sun this is not the case.

"I know this is my career. For so long music has been this escape and joyous thing and now I am turning it into a job and I have the fear that it will start to feel like a job or strenuous work, but I actually just haven't found that," he said.

Jarret is forever grateful to God for his talent and his family and friends for their unwavering support along his musical journey.