Jem Winston: How natural, how unspoiled, how friendly 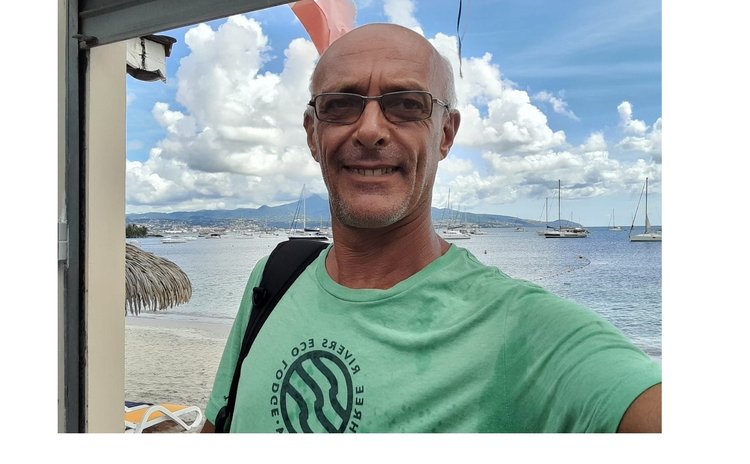 A commitment to practising and promoting sustainable living while giving back to Dominica and its people, saw the birth of Three Rivers Ecolodge, a sanctuary on the island which is now home to Jem Winston.

"I was a young backpacker traveling around the Caribbean, hitchhiking on boats and yachts," he said. "In Martinique I found a yacht coming to Dominica – a place I had never heard of - that was willing to give me a ride."

Dominica's topography and friendly people struck a chord with Winston when he arrived.

"I went to Trafalgar Falls, it was my first stop, I fell in love with Dominica during that first visit," Winston said. "I thought how natural, how unspoiled, how friendly."

Future visits to Dominica strengthened his connection to the country.

"I got a volunteer job in Guadeloupe on a campsite and would visit Dominica on the weekend," he said. "While I was on the campsite in Guadeloupe, I got the idea of doing something like that in Dominica."

In order to live in Dominica as he wanted, Jem realised he needed to put some things in place to make this happen.

"At the end of 1995 I decided I am going to change my life," he said. "So, I went back to England, to work and save money to come back and buy a piece of land in Dominica to build my camping site. In the year 2000 I decided I am never going to have enough money to do that so I came back anyway."

Jem purchased the property in Rosalie from a married couple who previously owned it. This land, surrounded by three rivers, was ideally suited for Jem as he loves water, and has lived near the sea or a river his entire life.

"For the first year I was going back and forth between Dominica and England sorting out documents etc. In 2001 I came to live in my tent on my land in Dominica," Winston said.

As with many others who have moved to Dominica from a more developed country, Jem had to adjust to the pace of business here, but he saw this as a blessing in disguise.

"Everything is so slow in the bureaucracy, but that was an advantage for me, because the fact that my planning commission took about a year gave me time to understand the place," he said.

Winston also cited understanding the practices and customs of the people as something he had to adjust to, but was more than willing to learn from the residents. Three Rivers is an environmentally friendly accommodation provider where tourists and locals can learn to live sustainably while being relatively comfortable.

"Back in the early days this was the first eco-lodge, the first campsite. We proudly helped put Dominica on the world map and won many international awards," he said.

Jem makes sure to pay it forward to residents in the surrounding communities.

"All employees are local. We have a community tourism package giving guests a real-life experience of living in Dominica. We do a 'Pack for a Purpose' programme where we let visitors know what items the school needs. And we've been able to secure scholarships and computers for school children, among many other projects," Winston said.

Though the COVID-19 pandemic and Hurricane Maria dealt serious blows to the country, Jem believes they are proof that Dominica is where he is meant to be.