Presidential Nominee Jennifer Wallace-Lafond is likely to be the first occupant of the new State House. But is the State House a blessing or a curse? 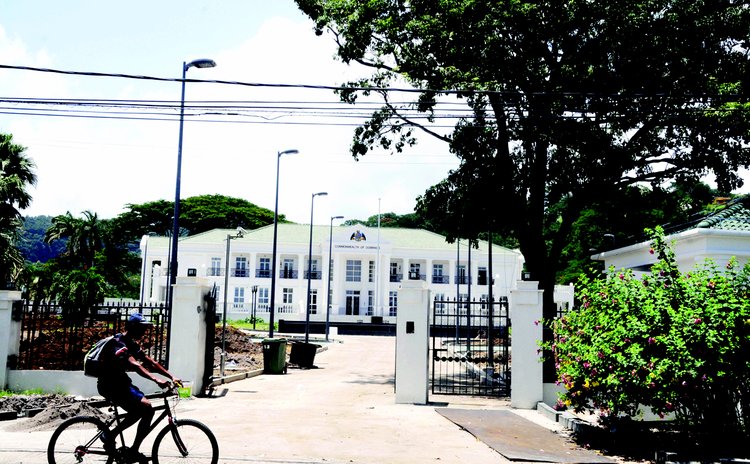 To those at the highest levels of the political structure, this is a blessing, a symbol of eternal gratitude and everlasting national pride.

"One can appreciate when this building is completed and it is handed over officially to the government the kind of impression it will have on all of us. There have already been positive comments from people about the project which is no doubt exhibiting a sense of pride," the prime minister, Roosevelt Skerrit, said in January when he led his cabinet to the site of the new state house.

However, to those who are stoutly opposed, it's nothing but a 27 million dollar curse.

To the ordinary citizen who drives by and marvels at its majesty, it's a sight for sore eyes. But to those, like Martin, to whom it's a sore point, it's a manifestation of Skerrit's haughty disdain for ordinary citizens.

"Visitors drive past it and they drive (a little further) down the road and they see blighted poverty," Martin contended.

The multi-million dollar state house, which was scheduled to be handed over to the government in August, the administration announced in a press release on 13 June, remains a foundation of inflamed passion and naked contention. The emotions are as raw today as they were even before the project began over two years ago, the sentiments no less cemented.

A pressure group, Citizens Awareness Programme (CAP), launched a campaign against the project, referring to it as the "State Malice" and "State Palace". Jerry Brisbane, the chairman of O.D. Brisbane and Sons, sought the European Union's intervention.

"It is unfortunate that our government has seen it fit to place this loan for an unnecessary expenditure on the backs of its citizens especially at this time when there is such great requirement for basic needs. In light of your organization's reputation for ensuring the wise use of aid funds, I anticipate that the EU will be more vigilant in its lending requirements and ensure that any monies loaned to Dominica will be for projects that add value to the living standards for our citizens," he wrote in a letter dated 1 October 2010 to the head of delegation at the EU office in Barbados. Three weeks later, Brisbane wrote to the Chinese president expressing "my serious concern on the mishandling of funds generously donated to Dominica by your country."

In the 13 June press release the government took a shot those who sought to wreck the project, stating that despite "a small, albeit vocal, opposition" the government remained committed to its completion, "emphasizing that the State House is not a luxury but rather a necessity."

However, despite having all but lost the war against its construction, those opposed to it have refused to raise the white flag of surrender, choosing instead, a different line of attack.

"It's such an anomaly. Frankly, it's a blight, not just on Skerrit but it's a blight on the whole leadership of the Caribbean," Martin told The Sun.

No date has yet been set for the official opening of the complex, Colin McIntyre, who, in the absence of Julius Timothy is the minister responsible for the state house, told The Sun in an email exchange. However, he said, "it is safe to assume" that it will be soon after the handing over. The proposed tenants, including the president, the Electoral Commission, the Police Service Commission, and the Integrity in Public Office Commission, will move in "immediately after the entire complex has been handed over," McIntyre added.

The cabinet has approved the appropriate staff structure to assist in managing and providing maintenance of the complex, the minister told The Sun.

Until then, this vexing project remains a necessary blessing to some, but a very expensive curse to others.