Jesse Hoffman: It didn't take long to be enchanted with everything here 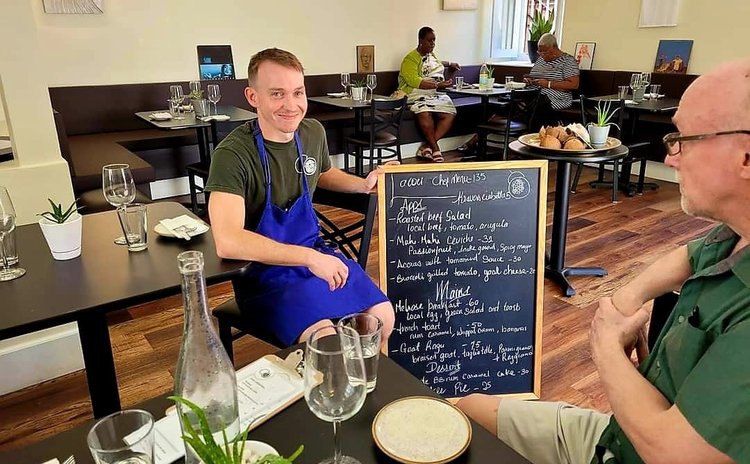 One determined businessman from Canada has taken the irrevocably bold step of packing up his belongings and heading to Dominica to pursue his passion.

Jesse Hoffman, born and raised in Peterborough, Ontario, came to Dominica for the very first time in November 2021 to join his business partner Sutherland Haskell and run their first restaurant.

Hoffman, who holds a Master's degree in cinematography pivoted to professional cooking when at a crossroads in his career.

He told The Sun he had never visited Dominica but followed his dream and good advice.

"My business partner Sutherland Haskell lived here before," Hoffman said. "During a visit in 2020, he heard about the renovation taking place at Melrose House."

Photos were shared, a business plan fleshed out, and the vision came into sharper focus. The decision was made to grab on to this opportunity.

"We had known each other from cooking school and we had talked about pursuing a business venture; opening a restaurant together. So when this break came along and we decided to jump on it," he said.

Hoffman admits he did his best to not develop any preconceived notion of the island as he spoke with people who had visited or lived in Dominica previously. Upon moving to the country in November, he spent considerable time getting to know the island and its people.

"We visited a lot of different natural spots and places to eat," he said. "So right away I was able to get a taste of the different qualities the island had to offer. It didn't really take long for me to be quite enchanted with everything here."

The co-owner of Lacou Restaurant, who was staying in Belfast initially, moved to Roseau when the restaurant opened in early 2022.

"That is when real day-to-day life started and I was getting to know the city, finding my way around, adapting to local customs, and getting a feel of the people," Hoffman said.

In his mere nine months on the island, Jesse already has a deep appreciation for Dominica, its residents, and more.

"The country itself, I always felt what an incredibly beautiful and well preserved, natural habitat it is," he said. "The people have been very welcoming, very kind, and generous overall."

The chef confesses one of the major adaptations of the big move, was to Dominica's culinary culture.

"There is an adjustment that comes with moving to a small island in terms of access to products and the different kinds of amenities and things that are available to you versus in bigger cities where you can go out and experience any type of food you want," Hoffman said.

From the business point of view, he says it has been quite a motivational learning experience to introduce new cooking techniques to the local cuisine.

"It has been very interesting to bring our style of cooking - which is more European style - here and see how the locals enjoy it and react to it because there is a very strong food culture in Dominica. And from the perspective of a restaurant owner, it is a totally different system of sourcing products here," he said.

The business partners, who plan to take a break in August, vow to be back in September with more grand ideas for their restaurant.

"We are going to be working on Lacou 2.0 so to speak by continuing to put some of the vision we had since the beginning," he said. "So yeah, it is a long-term process."

Hoffman remains forever grateful for the chance to continue on his newfound path in his newfound home and help influence the palate of the Dominican people.

"This has been a really amazing learning experience for me to come here. I have worked in restaurants in the past but I never owned one and to do it in a totally new country, it has been challenging but really rewarding. So, I am very happy to be here," he said.