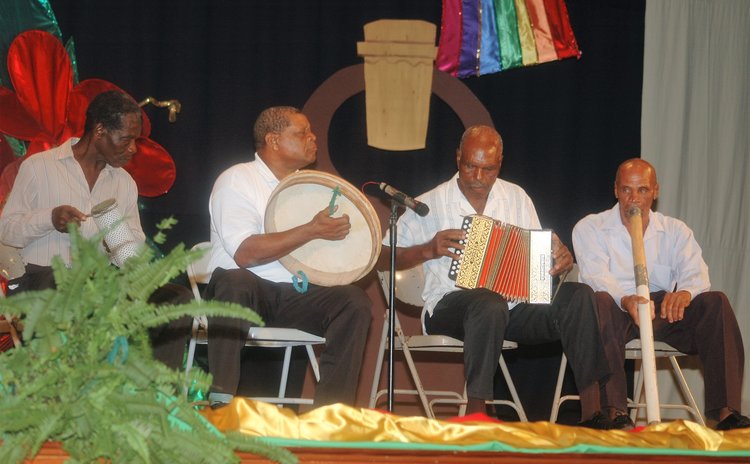 In a classy never seen before type of evening programme, the Cultural Division launched a film documentary entitled "Jing Ping Music: Foundation to Innovation" at the University of the West Indies auditorium last week.

As an important aspect of the DOMFESTA 2018 Programme of activities the film was scripted by Earlston Matthew, Gregory Rabess and Lennox Honychurch, the latter providing the narrative. The work served to document the various preferred instruments of the art form and its traditional uses at community dances, carnival affairs, sewinal, weddings among others. The shift to stage sought to tailor Jing Ping playing to an activity judged by a panel around Independence time, while the need to import accordions, migration and death of players, and the fact that young people do not want to practise in order to play seems on the one hand to endanger the survival of the genre.

On the other hand, however, Raymond Lawrence, Chief Cultural Officer and Chairman of the National Cultural Council has emphatically indicated that Jing Ping "…is alive and well and vibrant"; in other words Jing Ping was here to stay.

The proof was evident in the mini concert preamble, in which the renditions by the Portsmouth Jing Ping Band, a team of senior gentlemen, was followed by a complementary piece by the less senior Petite Savanne Jing Ping Band.

The appreciating audience bobbed and moved and clapped in the seats of the UWI Amphitheatre. After the film within which there was a modern type "Harold moment" – a note on the screen implying that the battery for the computer needed some attention – the audience congratulated the Cultural Division for the piece as well as the 7 Jing Ping Bands currently in existence. Discussion ensued within which the Department was encouraged to: Continue its Jing Ping classes; source accordions and other instruments to place in schools; stage competitions and festivals among school groups; and form out of many bands one large Jing Ping Orchestra to play for specific occasions.

Copies of the CD were presented to the Permanent Secretary in the new Ministry of Tourism and Culture as well as to player representatives, notably the only lady player present, Rosalie Stewart.