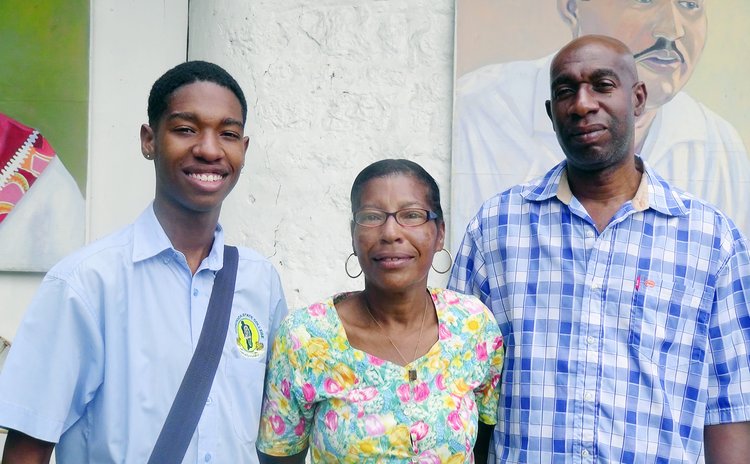 Ahmed Jno Baptiste of Capuchin is the 2015 recipient of the Marcel Djamala Fontaine Scholarship.

Ahmed was chosen due to his consistent involvement in the field of culture from an early age. In 2014 he received the Young Artist Award, an annual award presented by the National Cultural Council and the Division of Culture to recognize the most outstanding young person participating in the Independence Celebrations cultural activities for a given year.

"I am filled with emotion this morning for being so thankful for my son. The journey for him started since he was a baby. I never got involved in the sense of trying to discourage his mom or him for getting involved in culture. I sort of took a back seat to see my family push themselves. Most times they have to go out to perform and practice I am the one staying at home doing all the chores so they can go forward doing what they have to do," said Frank Jno Baptiste, Ahmed's father.

"The the scholarship will go a long way for him in encouraging him to do his studies and I will encourage him to do a project while he is at the college that will enhance culture," he said.

Speaking at the presentation ceremony Acting Chief Cultural Officer Jacinta David said "The Marcel Djamala Foundation in collaboration with Komite Pou Etid Kweyol (KEK) could not have selected a better candidate."
She added: "I trust that this award however, will create an incentive for young people to get involved in cultural activities and culture on a whole."

David then explained that Marcel Djamala Fontaine was devoted to the Creole language in Dominica. She explained that his efforts covered a broad range of activities ranging from literature and Creole media programmes.

"Djamala was very enthusiastic and committed to the Creole language and Dominica's culture in general. Marcel's efforts and commitments covered a broad range of activities including the development of literature and media programmes in Creole. Creating and performing Dominica's music and promoting environmentally responsible agricultural practices in Dominica. He made extensive use of mass media as a means of disseminating ideas and perpetuating Dominica's cultural heritage," she said.

"Ahmed is already following the footsteps of Djamala for he is involved in agriculture and he aspires to be a professional singer as well as to play a formal instrument," said David.

Previous recipients of the award are: 2006, Timbi Wallace of Paix Bouche, 2007; Jacintha Fagan of Check Hall, 2008; Mikael Mathew of Capuchin and 2009, Gloryfair Valmond of the Kalinago Territory.