Joan Frampton: No Recognition After More Than Six Decades in Culture 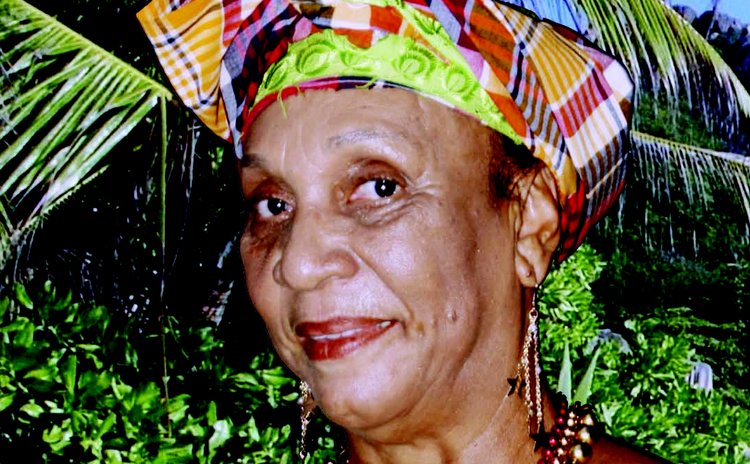 Joan Frampton of Pointe Michel has been in the business of culture in Dominica from a very early age, dancing bèlè from age six. The Pointe Michel Cultural Group (PMCG) that she heads has existed for 32 years but Frampton and the PMCG are yet to recognized at the national level.

Joan sings and dances and has been visiting primary and secondary schools around Dominica whenever the need arises, teaching bèlè.

Frampton is also concerned that those involve in the judging of the art form needs to be properly trained and understand the art form.

"Some of the judges who judge the competitions don't have a clue about the culture…they hurt is more than ever and I am very concerned about that," she said.

She is called the "Cultural Queen" of Pointe Michel yet Joan is yet to receive the Golden Drum Award or the Meritorious Service Award.

"I am not the one who has to nominate me but I am hopeful that before I die it will become a reality and I will truly cherish that moment," she said.

On frequent visits to Canada and the United States, Frampton is involved in assisting various groups in the advancement of Dominica's culture.

"I am not too old but have 60 plus years involved in culture in Dominica. I will not blame the Cultural Division because they are trying their best. Their hands are tied," she said. "We need them to push more for our culture, we need better treatment. I always encourage the younger ones. I sleep, eat and live culture".

Among awards Frampton have received are from Emile "Pa Ben" Serrant and FLOW.

"They are maybe waiting for me to be on a walking stick before I am recognized. I am not begging for it for I will be more than happy to receive it. I have taught the dancing and training of our culture across the length and breadth of Dominica.

"I am happy to have been doing that and I am ready to pass on the baton and don't let it die," she said.

She also laments the fact that like other cultural groups on the island, the Pointe Michel Cultural group which has been around for 32 years is yet to be recognized. According to Frampton, much more needs to be done for the enhancement and preservation of Dominica's culture.

"Look at Martinique, they do all and put in the resources, but we can't invite them to Dominica because of the lack of resources," she said. "Don't let our culture die, let us help preserve it."