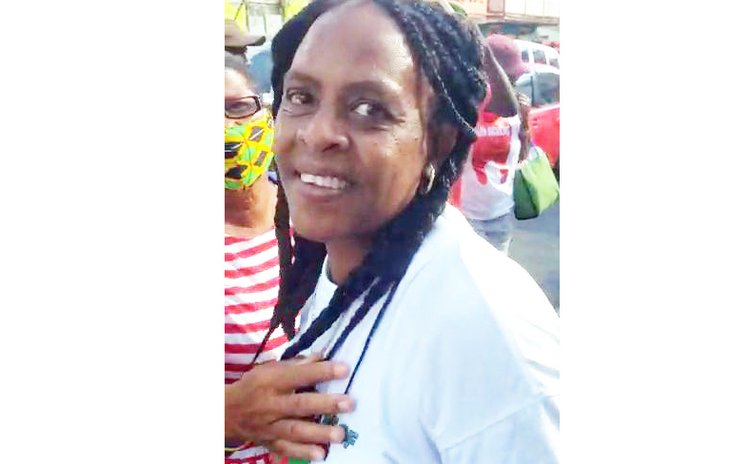 Another participant of Wednesday's Walk for Peace, Justice, and Prosperity" has landed before the court.

Eldica John, sister of the Parliamentary Representative of the Salisbury constituency, Hector John, has pleaded not guilty to three charges preferred against her by the police.

It is alleged that on September 7, 2022, at Kennedy Avenue in Roseau, John beat Constable Brendon Lawrence by punching him while in the lawful execution of his duty.

She is further accused of resisting arrest and obstructing Constable Lawrence while conducting his duties.

The incident is said to have occurred during last Wednesday's Walk during an alleged confrontation between the walkers and the police. Moments after the alleged offense, John was arrested on Kennedy Avenue and brought to the Roseau Police Station and was later granted station bail in the sum of $5,000.

At the court hearing on September 9, 2022, after the charges were read to the accused, Police Prosecutor, Inspector Davidson Cadette requested that the surety who stood for John — Janette Vidal— be examined under oath.

However, presiding Magistrate Pearl Williams told the Prosecutor section 5 of the Bail Act gives an officer in charge of the Police Station authorization to grant bail hence, "if it is written in the legislation there is no need to go against that," she said.

In response, Inspector Cadette contended that the surety should be challenged by the court to ensure she meets the means and control test. "With the greatest respect Your Honor, bailing someone at a station is different from bail granted in court," he said. "The onus is on the court to example to that individual their responsibilities under oath."

He added that station bail is merely to secure the defendant's attendance in court on the summoned date after the charge is preferred.

Notwithstanding his argument, Magistrate Williams held a different view.

"Bail is bail and I am not going against my word," she said. "Bail was granted for today's date and any other date set by the court as stated on the bail form. If it is different then the legislation should not give the police power to grant station bail."

She advised Inspector Cadette that the officers should be properly briefed on their responsibilities when granting bail and ensure that all requirements are met.

Vidal told the court she would like to continue as the surety for the accused and she was informed of her responsibility before leaving the court.

Magistrate Williams ordered that disclosure be made to defense attorney Geoffrey Letang no later than November 1, 2022, and the matter was adjourned to November 17, 2022, for trial.