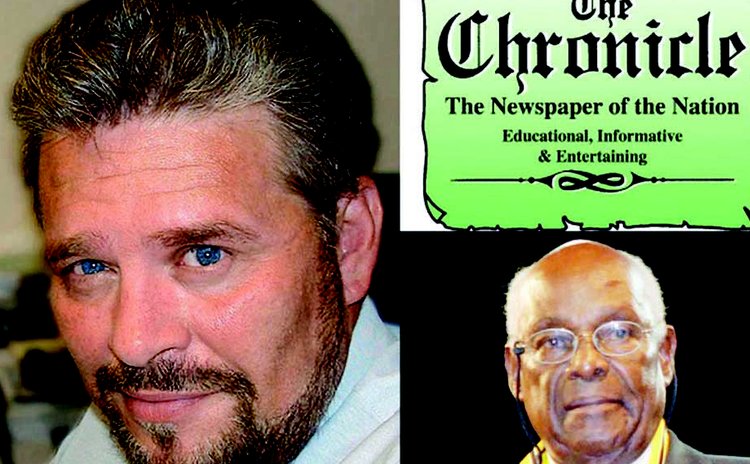 Jones,left, and Baron. The Chronicle masthead

For the third time in its 104-year history, the Dominica Chronicle is about to change hands. So why is that news making some people, especially the opposition, apprehensive? Maybe it's the background of the prospective buyer, his current affiliation to the ruling party, the new editorial stance of the paper and the perceived power of the press.

Whatever it is, final preparations for the execution of the sale of The Chronicle newspaper to Mike Jones is said to be at "an advanced stage" and the negotiators hope to complete the sale by the end of December 2013. That's what Jones told The SUN newspaper in an interview last week.

According to a well-placed source, The Chronicle was sold (at least on paper) to Mike Jones and he and Frank Baron, the current owner, have also signed a two-year contract, in the first instance, for rent of the Chronicle's office in Loubiere and Paramount Printers will continue the printing of the paper.

But Jones, in the interview, denied having already sealed the deal.

"Not yet, but I hope to be the owner of The Chronicle in the near future. My hope is that by the end of the year (2013) the sale will be closed and finalized; negotiations are continuing and it gets a little more difficult as we go," he said.

Negotiations were at "a ticklish time" and that during the due diligence period, a lot of things can come up which can affect the end results, he added.

Questioned about a letter sent out to the advertisers of The Chronicle requesting "cash" for the placement of ads, Jones said: "Frank and or myself did not sign that letter; it came from the advertising department.

"They made a decision to not offer credit terms to their overseas advertisers in anticipation of the sale and somehow, the local advertising thought that, that meant no credit to anyone."

Jones was not prepared to give any details as it relates to the asking or selling price of The Chronicle.

"I am not prepared to do that…Frank and myself are bound by a confidentiality agreement and so even if I wanted to tell you I can't," he said.

Jones, a former United States Peace Corps volunteer who made Dominica his home more than three decades ago, is a livestock specialist, a graphic artist and painter. Following a long stint overseas as a Courts' (the furniture and appliances multinational) graphic designer, Jones returned to Dominica just prior to the 2009 general elections ostensibly to improve the ruling Party's campaign in the area of communications. Since then he has been employed as an advisor to the Government of Dominica.

If Jones buys the Chronicle at the end of the on-going negotiations he will own one of the Caribbean's oldest newspapers. In the article titled "The Dominica Chronicle- a Proud History", published in the January 16, 2009 newspaper's centenary commemorative magazine, author Irving Andre said the paper was first published by Catholic Bishop Schelfaut in 1909.

But in the 1970s the paper faced a financial crisis and it came under the management of Management Consultants Ltd of the late Charles Maynard; it was renamed the New Chronicle. The Catholic Church ended its involvement in the paper in 1990 when former Chief Minister Frank Baron bought the new Chronicle for $10,800.

The paper was successfully sued by Vic Riviere for libel and he was awarded $20,000. Unable to pay, the paper declared bankruptcy but continued life under its new name, the "Chronicle". In his interview last week, Jones told The SUN that he was due to be at a meeting today, December 5, 2013 with Baron to hammer out further details on the deal.

When contacted by The SUN Baron said: "I don't know about the new management part…I will be talking to the people today (December 5, 2013) and I might be able to give you some information after that."