JP: A show of Confidence 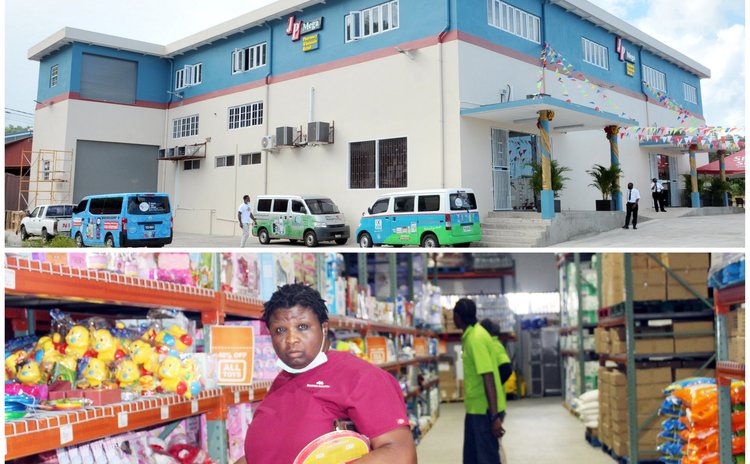 Top photo: Outside Mega Store and shoppers inside store

Jolly's Pharmacy (JP) has been in business for 40 years and it has become a household name in Dominica.

The company, formed by deceased Anderson Jolly, is currently celebrating 40 years under the theme: "With Growth Comes Responsibility: Building Community Together".

That theme will be used throughout the year according Carlton Languedoc, the Head of Public Health and Public Relations and Head of Sales at Jolly's.

"The feedback and sentiments received are overwhelming…we offer our pharmacy, we have a bit of retail and also bulk and wholesale and coming soon we will have a restaurant because lots of people are working in that area," Languedoc said.

Languedoc said people have been asking who was the building contractor and JP has been criticized for awarding the contract to a non-national.

"We are a CARICOM nation and we are also pro-OECS. That building was built by a St. Lucian company. We were very impressed with it. The time allotted was nine months and we got it within that time. But everything else was done by Dominicans: electrical, plumbing, retaining wall, painting and all. It must also be noted that the drawings for the building was done but a local company. So it is not fair to say that we brought in a foreign national to do the building," he said. "Some way somehow we ensure that Dominicans were very much involved in the building. We have now employed 25 people. It's an entire win for the economy, for the Fond Cole community and our business partners because we buy from them and they also buy from us."

He said the building cost about EC$10 million.

Languedoc said by building the JP Mega Store, the company has shown confidence in the Dominican economy.

"People are asking us why don't we set up business in the region. But out simple answer is: charity begins at home. If you realize, we have no foreign pharmacist because we try to ensure that they are home-grown and Dominicans get a piece of the pie.

"We are not xenophobic or against our CARICOM brothers and sisters. No, but we are for capacity building and somebody in Dominica can fill that void," he said.

He also revealed that the manager, Shana Williams, has been with the company for the past 10 years.

"She is from Soufriere and started with the company in 2010 and worked her way up the ladder as a cashier, then pharmacy technician and then procurement supervisor…it's also like a university where we motivate and help people to develop themselves and when the next offer becomes available it begins here," he said.