Judah Jno. Baptiste: The best of both worlds 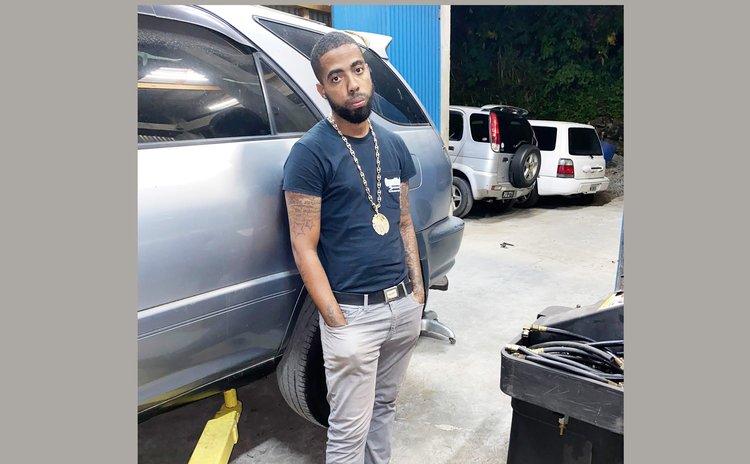 Mechanics and music make quite the mix, yet Judah 'DiYoute' Jno. Baptiste is pulling it off quite successfully.

The local Hip Hop artiste has put his business skills to use, being the manager of Grease Monkey Mechanics, which he runs along with his brother Marcus Jno. Baptiste, the chief mechanic, with over ten years of experience under his belt.

"What makes us stand out is we take pride in doing things to the manufacturers' specification," Jno. Baptiste told The Sun. "We don't do things 'modifay' in local parlance. We take pride in using state-of-the-art tools and equipment to do our work."

Grease Monkey Mechanics opened two and a half years ago amidst what one may consider a saturated market of vehicle mechanics. But Jno. Baptiste says there was a need for their services.

"We did surveys and many people weren't very satisfied with the level of work and service they got from other mechanics," he said. "The majority of good skilled mechanics are roadside, and people are concerned about the security of their vehicles, also they don't have the proper tools and equipment. And a lot of established major shops don't really have skilled mechanics, but they have the equipment. So, with us it's the best of both worlds."

The company, which has four employees has encountered its fair share of struggles in its almost three-year life span.

"The most challenging aspect is sometimes the unavailability of parts and equipment. And when you have to import parts the cost of duty is a problem. Because you don't want to charge your customers a lot but then you have to sometimes because of what you pay on parts," he said.

With every downside comes an upside. Jno. Baptiste says the most rewarding part of working at Grease Monkey Mechanics is the satisfaction of customers.

"Seeing the growth of the business, satisfying our customers, and the fact that most customers we work with always refer someone else to us," he said.

The company's use of social media platforms is another way it keeps and grows its followers. The future looks bright for Grease Monkey Mechanics as the brothers only foresee the company growing in size, popularity, and customer base.

The work involved in keeping the garage functioning smoothly means time management is key to Judah since he has his entertainment career to focus on. DiYoute entered the music scene in 2009 singing Bouyon. He eventually transitioned to the Hip Hop genre in 2015.

"I didn't like the path Bouyon was taking, the topics, and the vibe on a whole", he said. "To me, my type of lyrics would not be hitting it in Bouyon, it's not what people are into right now."

DiYoute focuses more on self-motivation and positive upliftment in his songs and lyrical content, telling the Sun: "For everybody who takes the chance to listen, they love it, positive reviews only." The switch to Hip Hop wasn't difficult for the young artiste since this genre has been his first love. This is quite obvious as he is one of the few artistes doing Hip Hop in Dominica. His lyrical content has also put him on the right path.

"In fact, for two of my last three albums released on Spotify, Apple Music, and other platforms, I charted number one in Dominica for two weeks straight," Jno Baptiste said.

That's quite an accomplishment for a Dominican Hip Hop artiste based who lives here.

DiYoute laments the most challenging part of being an artiste in Dominica is minimal support for the artform. Also, the majority of entertainers need to have a regular 8 – 4 job to sustain themselves.

"A few artistes actually went into music full time and you can see their quality is better, their productivity is better, everything is better because they can focus on music," he said.

While not revealing too much of what the future holds, he advised Dominicans to look out for big things from him soon and follow him on social media to keep abreast of the latest Hip Hop developments.