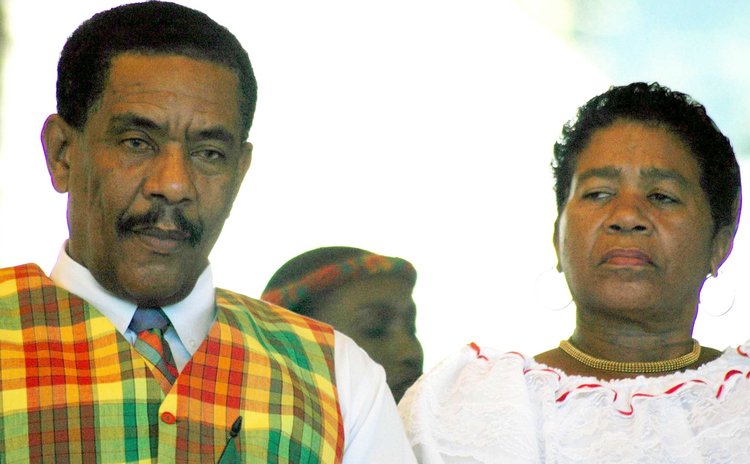 His Excellency Charles Savarin and Mrs. Savarin at an observance of independence function

Roseau, Dominica – Tuesday October 1, 2013 - His Excellency Charles Angelo Savarin, DAH will be sworn in as the eighth person to discharge the function of the office of President of the Commonwealth of Dominica since independence, at a ceremony to be held at Parliament Building on Wednesday October 2, 2013 at 11:00am.

The oath of office to be sworn to by the President will be administered by Her Ladyship Madame Justice Bernie Stephenson Senior Resident Judge designated by Her Ladyship the Hon. Janice Pereira Chief Justice of the Eastern Caribbean Supreme Court.

The programme for the occasion includes an address by the Hon. Roosevelt Skerrit Prime Minister and a reply by President Charles Angelo Savarin. The Master of Ceremony for the occasion will be Ambassador Steve Ferrol Cabinet Secretary, while Evangelist Peter R Augustine and Monsignor Eustace Thomas will lead the gathering in prayers.

Mr Savarin was elected President of Dominica by the House of Assembly on Monday, September 30, 2013 in accordance with the provisions of Section 19 of the Constitution of the Commonwealth of Dominica.

Mr Savarin who will be 70 on October 2, 2013 comes to the office of President after a long and distinguished career as a teacher, trade unionist, parliamentarian, diplomat and government minister. Previous to this, he served as a Senator in the parliament during the Interim Government (1979-1980); during the first term of the Dame Eugenia Charles, Dominica Freedom Party administration (1980-1985); and during the Dominica Labour Party government (2005-2013).

Mr Savarin has also served at the diplomatic level, first as Minister Counsellor/ Dominica High Commission to the United Kingdom (1985-1986). In 1986, Mr Savarin was appointed Ambassador/ Permanent Representative to the European Union, Ambassador to the Kingdom of Belgium, the Grand Duchy of Luxembourg and the Swiss Federation. He was also the Permanent Representative to the United Nations Office in Geneva and principal ambassadorial spokesman for African-Caribbean and Pacific States ACP, on bananas. Mr Savarin served as General Manager of the National Development Corporation (1993-1995); Parliamentary Representative for the Roseau Central Constituency (1995-2005) and Political Leader of the Dominica Freedom Party (1996-2006).

Charles Angelo Savarin was born in the town of Portsmouth, is married and has five children. (Government Press Release)