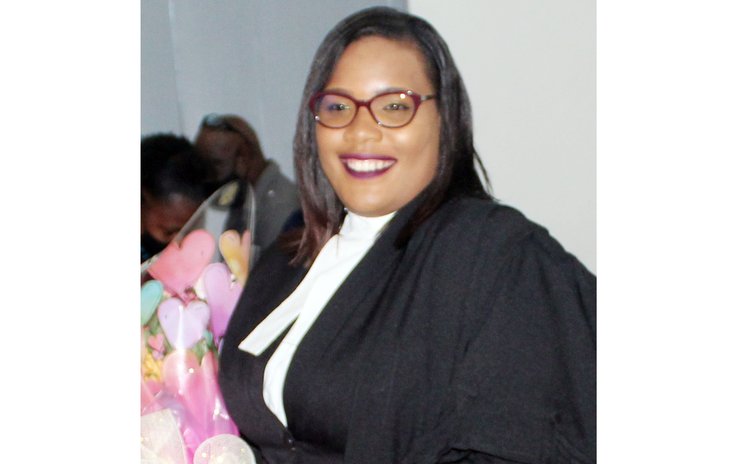 Resident high court Judge Wynante Adrien-Roberts has urged attorney-at-law Kayla Jean Jacques to be humble and at all times show respect to the court and her colleagues.

She made those remarks at the admission of Jean Jacques to be a barrister and solicitor of the Eastern Caribbean Supreme Court.

"Your journey as a lawyer has just started. You know absolutely nothing and if you start from that then you can grow and you will see how quickly you learn a lot," Judge Adrien-Roberts said. "Be humble, show courtesy and respect to the court and your colleagues, your word is your bond. Remember, law is a profession of high standards. When you are practicing, it is not about winning, but rather, you have to be the best that you can be."

Judge Adrien-Roberts called on Jean Jacques to join the Dominica Bar Association and give back to the community and school saying that some students at the school may need some guidance.

"Imitate good practices. When you come to court, remember all that you have studied and do not just cut and paste. Do not change who you are as a person and imitate bad habits. Don't be afraid to be a practicing member of your church and be true to you," the Judge said.

Justice Adrien-Roberts also urged the new lawyer to be prepared always when coming to court and also take time for her family and her health.

"Find time with friends and family…find time for God, your family has supported you, show them the love, respect and gratitude," the judge said.

In her first address to the court, Jean Jacques thanked her mother Paula and father Kenrick Jean Jacques who, she said, molded her into the person that she is today.

"From as early as First Form at the Convent High School, I was determined to pursue a career as an attorney at law, and I have worked diligently to make that dream a reality. This was by no means an easy feat. My journey was filled with its fair share of financial obstacles, personal sacrifices and occasional moments of self-doubts but my parents reminded me that he who has begun a good work in me will see it through to fruition," she said.

She pledged to serve uphold the principles of the legal profession and to serve her clients honestly, efficiently and competently.

A pleased father, Kenrick Jean Jacques, said he was extremely delighted at the achievements of his daughter.

"I am not at all surprised at Kayla's achievements. Since a young child growing she has always set her mind on her work," he said. "I am confident that she will take the sound advice given to her by the Judge and will continue to make us all proud".