Juiceman: "It's been a hard two years" 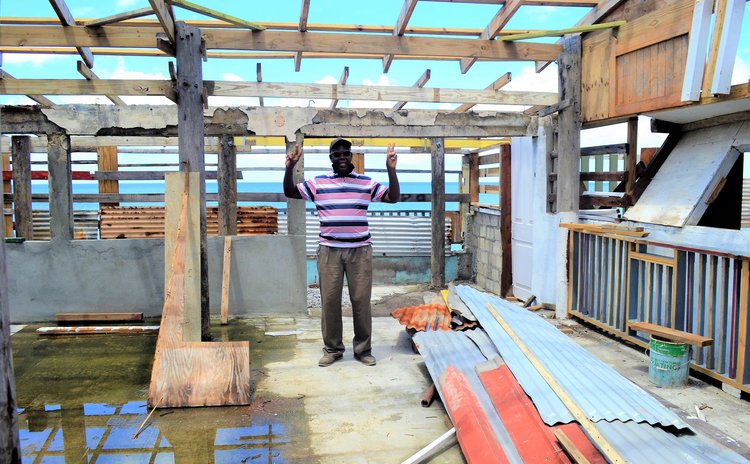 It's been nearly two years since a fire completely razed the property of Emmanuel Frederick Joseph affectionately known as "Juiceman"; with little assistance rebuilding from the ground up has been very slow.

On the evening of June 24, 2019, Joseph hopelessly looked on like 20 years of investment, a lifetime of personal belonging, his residence as well as his place of business "Juice Man Cafe & Night Club" in Pottersville went up in flames.

He was left with just the clothes on his back. Now 20 months later, Joseph has been labouring to restore his sole source of income and place of residence.

The day following the fire, then Dominica Labour Party (DLP) candidate for the Roseau South Constituency, now Speaker of the House of Assembly Joseph Isaac pledged government's support at a press conference to assist the business owner in rebuilding his establishment.

Though Joseph requested not to speak on the matter, as it pertains to Government's support, he informed THE SUN that he has only received a few pieces of lumber and sheets of galvanized from a foreigner valued at EC$10,000 and petty cash from friends and strangers- a clear indication that nothing has been done from the Government's end.

"It's been very tough for me. I went from being fully independent to having everything taken from me, but slowly I have been rebuilding my business, but I'm missing several materials. I'm really in need of assistance," he said.

As it pertains to the cost of reconstruction, he says he's been quoted EC$150,000, to repair the building, measuring approximately 73ft x 48ft.

"I would be grateful if the public could donate some material or some cash, tiles, cement, or whatever they can because I need all these things," Juiceman said.

He's patient and hopeful that he will be able to complete the first phase come summertime as the government has indicated the possibility of cruise arrivals.

In the meantime, he still managed to be somewhat operational and has downscaled to only selling local drinks and his popular smoothies, in a small make-shift corner of his once vibrant business.

A Go-Fund-Me "Help 'Juiceman Rebuild His Business" has since been established and to date has raised $60.