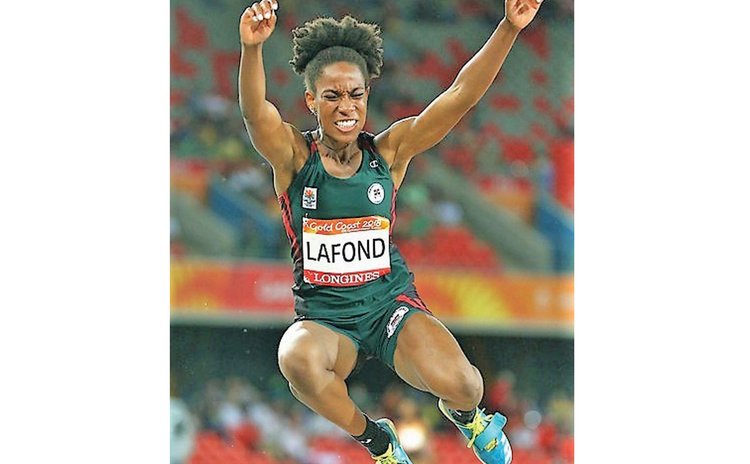 In flight: Long Jumper LaFond at the Commonwealth Games

Thea LaFond, the Commonwealth triple jump bronze medalist has once again unleashed the jump of her life (14.52m) and in the process smashed her outright national record and logged the best jump, globally, for 2021.

This isn't the only time that the 26-year- old has placed Dominica in the limelight for her impeccable skills.

In 2019, she set the Organization of the Eastern Caribbean States (OECS) outdoor record of 14.38m, before sustaining a season-ending injury. Getting back to the track, in February of 2020, she surpassed the Olympic standard by a centimeter and became the first woman from the OECS to make the Tokyo 2020 standard.

In an interview with THE SUN, Dominica's first and only Commonwealth Games medalist, who moved to the United States at the tender age of six, shared that the key ingredients in her success are hard work, committed training, and dedication to her craft.

Speaking on her recent record book accomplishment, she said, "my coach and I went in knowing that something good was going to come from this competition, so to see the numbers reflect how we felt going in, it was amazing."

Unlike others who may say they had a calling for the sports at a very young age, Lafond revealed that her story is quite different. Had it not been for her family's incapability of paying for her dance classes, it's scary to say that she may have never gravitated towards the speed and thrill which track and field offers.

Nevertheless, as fate would have it, she did, and her inspiration to being an athlete was further solidified after watching Usain Bolt's stunning gold medal-winning successes at the 2008 Beijing Olympics.

At the age of 16 she was approached by Jamaican strength and conditioning coach Chris Paul, where he suggested she should consider representing Dominica internationally. After some thought, Lafond warmed to the idea and committed to doing just that.

The next year at the 2011 World U18 Championships in France, LaFond made her international debut but overwhelmed by the experience, she finished well short of her PB in both the high jump (30th) and triple jump (25th).

On her return to the US, she took up a place at the University of Maryland and 12 months later qualified for the World U20 Championships in Barcelona, where she fared slightly better to place 19th in the triple jump.

Despite her many successes, there has been sadness. One, in particular, was her performance at the 2016 Rio Olympics. Struggling for confidence in the biggest competition of her life, Lafond placed 37th and last with a modest best of 12.82m.

But as the saying goes, you win some, you lose some. With a new strategy and coach, in 2017 she set two national records highlighted by a 14.20m leap at the Penn Relays. The following year, she went even further and made history by becoming the first athlete from Dominica to win a Commonwealth Games medal, followed by her noteworthy accomplishment in 2019 and 2020.

COVID-19 of course has slowed her down. But this high school teacher says with the help of family and friends she has built a makeshift weight room in her basement to ensure that she gets the necessary training required.

Reflecting on the turmoil of the past year, she stated, "I've learned to make the best situation out of every situation."

The athlete has big ambitions for the year ahead. For the past five years, she has been preparing for the 2021 Olympics. But success for her will not only be defined by medals but also measurements.

"I see myself competing for a few more years. I'm excited about the next world, for the next Commonwealth Games. I am just excited to be in a position where I can help put Dominica on the map. We are a gem in the Caribbean and I am more than honored to be able to represent my country," she said.