Jump Ball No. XXXI (Part I): By Arlington James 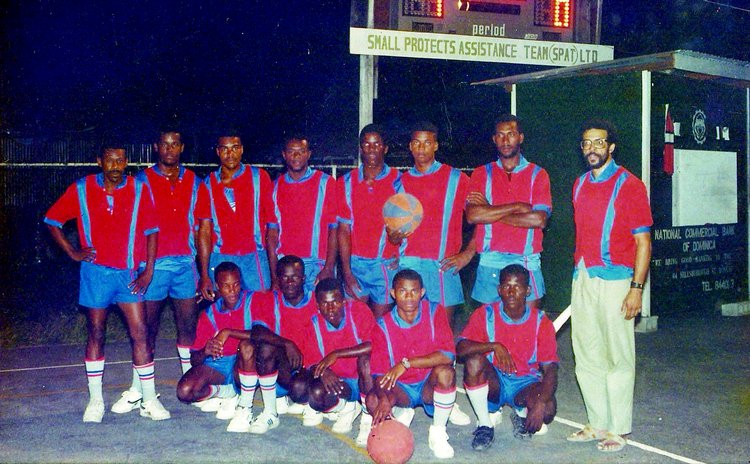 When the first jump ball was administered in Dominica's basketball league, in May 1966, there were only 4 teams and a single division.

The League grew incrementally, and by 1969 there were 8 teams, but divided into a First Division and a Second Division for the first time. The first teams which competed in the lower division were St. Mary's Academy (the "junior" of two teams from SMA); Falcons (new); and Dominica Grammar School and Nationals (both had played in the single-division league in 1968).

Come 1970, the number of teams in the lower division increased to 6, with the entry of Gaymels, Lakers and Panthers, but the exit of Nationals of Grand Bay.

Interestingly, from 1970 the press had begun referring to the Second Division as the "Junior Division". Meanwhile, the decade of the 70s – even with fluctuating levels of team participation - continued to be a very important and exciting one for the national basketball league's lower division.

Come 1971, it appears that participation dropped back to 4 teams, but with the two school teams (SMA, DGS) still holding the fort. Panthers were into their second year, while new-comers Royals completed the roster. Panthers won the 1971 Division II League competition, while SMA Sunsets captured the Knock-Out championship.

Unfortunately, from 1972 to 1974 the newspapers (Star Dominica, The New Chronicle) carried nothing about games in the lower division, so it is quite possible that there was no such Division for those three years. In 1975 Star Dominica reported on 2 games of only two teams in the Junior Division, viz. DGS and Bullets. However, one can safely assume that there were other teams in that Division.

But, come 1976, the Junior Division involved no less than 7 teams, with the two boys secondary schools accounting for 4 of those teams, viz. DGS I, DGS II, Marians and SMA Gnats. That year, we also saw the entry of Bata Pros – who sometimes played on the same nights as their then 3 year-old seniors), Bullets (at least in their second year), and Ken Stars – the only team from New Town ever to play in the national basketball league.

The year 1977 was another historic one for Junior Basketball on Dominica. Although the number of teams in that Division dropped from 7 to 5, we saw the return of Lakers, only one team from Dominica Grammar School, viz. DGS Jets, and none from SMA.

Two new teams joined the Junior Division that year. Firstly Back Street Magicians – with players such as Sylvester "Tata" Joseph, had their first go at the championship title that year. The other debutant was Pioneers, the first women's team in the history of Dominica's basketball, and they played against "the boys" for a few years (See 26th June and 3rd July 2017 editions of Jump Ball). Bata Pros was the fifth junior team that year.

The year that our National Flag was first hoisted (1978) also saw 5 teams in the Junior Division, but this included new entrant Trojans; the return of SMA; and the continuation of Bata Pros, Lakers and Pioneers. That year DGS Jets and Back Street Magicians bowed out.

Fast-forwarding a bit, the 1980s saw the inauguration of a Women's Division as well as a Division III. The 1987 Division III League championship was won by Sports & Wear Reefs. One of the other teams in that Division that year was Windsor Hawks.

In Reunion Year 1988, eight (8) teams competed in the lower male Division, and these included three from the rural areas.

1988 also saw DABA staging a set of 16 & Under competitions as part of the national league programme. St. Mary's Academy copped both Ball-O-Rama and League championships, while Moreau's Hoyas walked away with the Knock-Out trophy. Other participating teams in that Division were Dominica Grammar School and Grand Bay Primary School. Continues next issue.