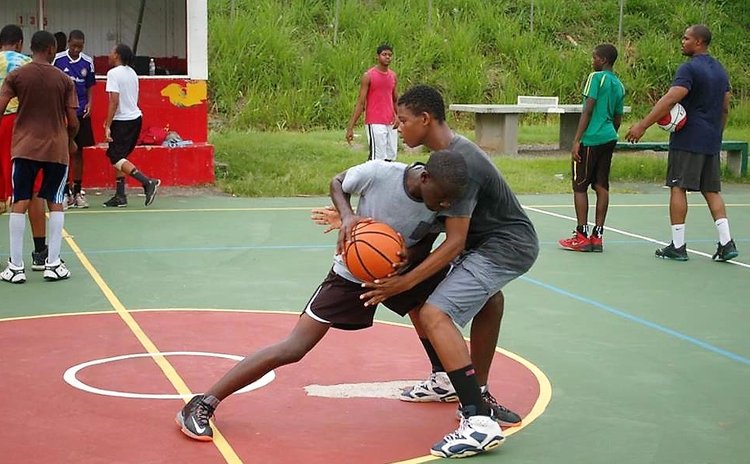 The first of the two Years of Environment & Shelter (1989) saw a substantial turn-over of teams in the 3rd level men's division (3LMD), compared with what obtained the previous year. Although the number of participating teams remained at 8, that year there were five new entrants into that Division, viz. Bengals (Soufriere), Bullets, and Cavaliers, Roseau Boys School and Windsor Hawks (all from Roseau). The other teams competing that year were Smashers, Stormers and Wolverines.

Cavaliers won the 1989 Division III League Championship with a 7-0 Win-Loss record; there may not have been a Knock-Out competition in that Division that year.

It must be noted that players in Division III, and to a lesser extent in the earliest editions of the Junior Division or "Division II" were, by and large, teenagers. However, during the 1990s there was a substantial shift in the age-profile of the players towards youth-age.

The year 1997 saw the Dominica Amateur Basketball Association renaming all the divisions participating in the national league. Thus, the third level men's division, which was previously named Division III, was then redesignated "Division II", and the women's division – "Division III". The move may have been welcomed by the players, but for the purposes of documentation, that may not have been a wise move.

That said, however, in 1997 ten (10) teams competed in the 3LMD, with more than half that number coming from "out-of-town". Bullets and Panthers hailed from Massacre; Dolphins (Portsmouth); Pros and Sixers (Grand Bay); while Rovers were the pride of St. Joseph. Meantime, the other teams in 1997 were X-Men, Trumps, Falcons, and Nuggets. The 1997 "Division II" League championship was captured by CCD Panthers.

1998 saw a 30% drop in the number of teams participating in the 3LMD over the 1997 figures, as only 7 teams vied for league championship honours that year. Falcons, Rovers, Massacre Bullets, Sixers and X-Men returned, with Cobras (Paix Bouche), and Green City (Roseau; returned after several years) as new entrants. The 1998 "Division II" League championship was won by Sout' City's Hillsborough Sixers.

Stepping out of the 20th Century, the year 1999 saw a significant increase and turnover in the 3LMD, with the majority of the teams again coming from out-of-town.

The year of Dominica's 21st Anniversary of Independence saw the entry of OO-Washers (from Portsmouth), Oilers (Castle Bruce; returned after a long break), Paix Bouche Eagles, Eagles (from Trafalgar), Warriors (Marigot), Renegades (Wesley), and Flash and Champs (from Soufriere). DOMLEC and Rebels were the other new teams, while only Bullets from Massacre had competed the previous year.

Come 2000, Dominica's basketball saw only two divisions in the national league: Premier Division and Division I. That year, ten (10) teams competed in the lower men's division and, surprisingly, not one was from Roseau.

The year 2014 saw a major turn of events in terms of competitions in the 3LMD of the DABA for the second time.

The Introduction of the Report, 'Selected Statistics and General Information From the Dominica Amateur Basketball Association 2014 Basketball Season' stated, "However, there was a reduction in the number of male-dominated Divisions, from three to two, with the 'scrapping' of the Division II – at least for this season – on account of the low number of teams that registered in that Division." (Pg 4, Para 4)

The Report stated further, "…the remaining Division II teams were absorbed into Division I." Hence, there was no Division II (3LMD) in Dominica's national basketball league in 2014, and there was no change in the situation in 2015, 2016 nor 2017 (or 2018, with no League)! Concludes next issue