Cardinal Kelvin Edward Felix: The Sun's Person of the Year 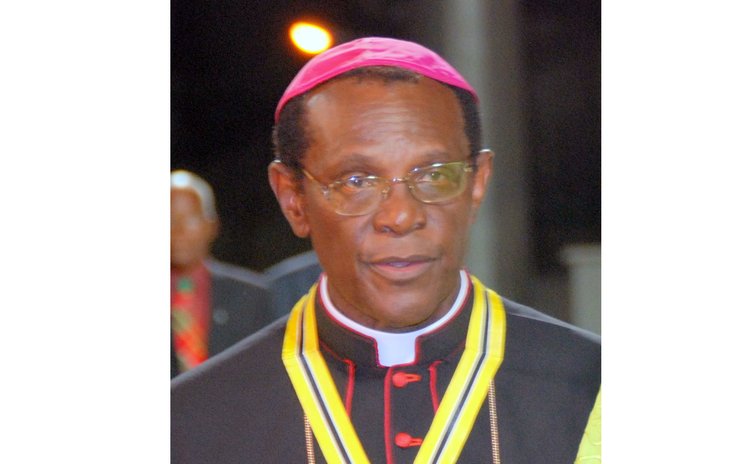 The phone rings. The voice at the other end is calm, confident, assured. Soothing, even.

There's some chattering, and then he laughs. That laugh! So warm, so welcoming, so friendly. Somehow, it forces you to know him even if you've never met him. And he does it often.

Kelvin Felix was born for the priesthood. The sixth of nine children, he found peace amidst the noise and when, at the age of five, he lost his mother, he found solace in the church. She was young too, just 33, and his father never remarried, so the young Kelvin grew up with no one to call "mom." "I can't remember very much about her. I can't recall what she looked like."

Shortly after his mother's death, one of her sisters went over to help but she had a hard time managing nine children, the eldest of whom was only 13. So she left, and Kelvin and his siblings were left to helpers and his eldest sister.

"We managed well. My eldest brother and eldest sister they had to take responsibility for the younger ones and we had to obey them," he told The Sun, the laugh never far away.

They obeyed because their father, a policeman and "a very strict disciplinarian" demanded it.

Spankings were infrequent, but Major Felix, as their father was known, did not spear the rod.

"I can vividly remember the last spanking I got from him." It was for picking kennips off the neighbour's tree, although the fruits were hanging over the Felix's yard. "He warned us we were not to pick it. He told us not to touch the kennips."

The young Kelvin ignored his dad's warning, and, knowing a beating was not far away, prayed that his father would forget (they always prayed that he would forget). And it seemed he did, until two weeks later, when another of the boys helped himself to some kennips. That brother got spanked "and he gave me my share."

The strictness of their upbringing meant the young Kelvin and his siblings remained on the straight and narrow. There was never any thought of mischief (he laughs again when asked), not during his primary school days at the Roseau Boys School, not during his years at the Dominica Grammar School, which he attended from 1946 to 1950 after having won a scholarship in 1945.

"My father was so strict that he warned us that if anyone was to report us he would ask no questions. He would flog us. So we were always well behaved."

Still there were the odd times when he, along with other boys, would dare the guards at Botanic Gardens by picking tangerines without permission.

"It was fun to pilfer, to pinch the tangerines and so forth. But for mischief otherwise I can't recall."

Kelvin Felix got the "call from God" when he was seven. He was a regular at church with his "very prayerful" elder sister and he felt at home there.

"My mother having died when I was five, I followed my bigger sister to church. She was very prayerful. And that is where it started," he told The Sun. And, the more he thought about it, the more convinced he was that this was indeed his calling. True, he was keen at sports, true he had some of the track heroes at the DGS like Vernon and Winfred Julian and Dorian Shillingford as his mentors, true he was victor ludorum (the winner of the school games) in his last year at secondary school, but he never considered pursuing sports as a profession. He never considered a different profession. All he wanted was to be a priest.

"When I told my father I wanted to become a priest he asked 'why not a doctor? Why a priest?'"

But Kelvin Felix would not be deterred. He had heard the call from God and he would answer. So as soon as he entered the DGS he became an alter server. He would spend lots of time at the presbytery and accompany the priests religiously to the outer villages like Morne Prosper and Laudat.

"I was always in church. I was at all funerals serving as alter server."

Two weeks after completing secondary school at the still tender age of 17, Kelvin Felix left for the seminary in Trinidad where he was trained by the "very strict" Benedictine monks. The discipline at home served him well there and not once did he ever consider quitting.

He returned home six years later in 1956, having been ordained a priest, but his service to the church here was limited to brief stays at the cathedral, the St. Alphonsus Roman Catholic Church and as principal of the St. Mary's Academy for three years.

Having studied adult education and sociology to help with setting up credit unions here, Fr. Felix used his knowledge to help empower West Indians in England, where he set up half a dozen credit unions.

"When I saw the plight of the West Indians in England - they could not get loans, could not send their children to university – I set up the credit unions and …they moved up the ladder quickly."

But it was in St. Lucia that he would spend nearly 30 years of his half century as a priest. Following the fire of 1948 that ravaged Castries, his father was invited to St. Lucia to help restore order. Soon after, he was offered the position of police chief. So he moved the family to St. Lucia and, although Kelvin was at the seminary, he would visit often when on holiday. In 1981 he was appointed arch-bishop of Castries, where he served until his retirement in 2008. His official title remains arch-bishop emeritus of Castries. No wonder many in St. Lucia believe he is St. Lucian.

Since his retirement as bishop, he was served as parish priest in Soufriere. He turns 82 in February and could be relaxing in his golden years. But this is not the way Fr. Felix wants it. He believes now is the time to give as much to the land of his birth as he has left.

"I felt I hadn't given sufficient service to Dominica. So that's why I came back…and I like parish work."

And he's enjoying it because he is among the people. He doesn't have a secretary and he attends to the parishioners every day. And being appointed a cardinal has not changed him. Cardinal Felix remains a simple, open, down to earth individual who prefers to be referred to as "Fr. Felix".

"They've always known me as Fr. Felix and I want them to continue to call me Fr. Felix. Don't go biting their tongue looking for titles. I enjoy it. It's very warm, it's affectionate calling me Fr. Felix."