International tourism does not exist despite plans to reopen Dominica's borders in July, critics say 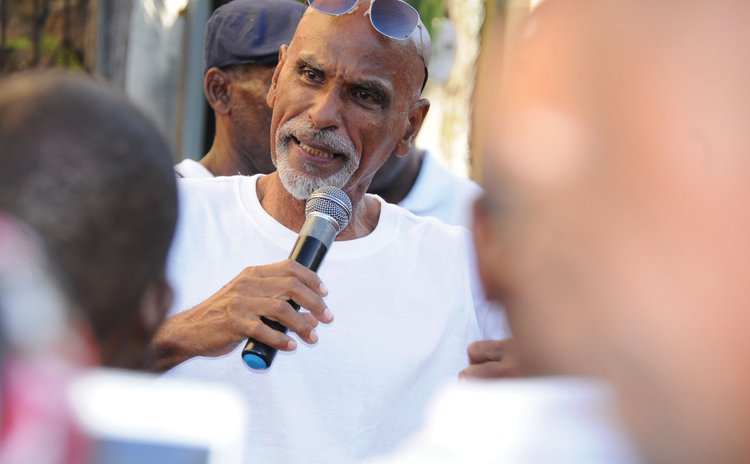 At a meeting in Roseau in 2018-Athie Martin

It's just talk, nothing but idle talk!

That's the response of hotelier Athie Martin to an announcement by the Prime Minister, Roosevelt Skerrit, that come next month the country's borders will reopen to international travel.

In the premiere of his talk show, Anou Palay – creole for, 'Let's Talk' –Skerrit said now that the country no longer has any active cases of the coronavirus, the attention was on reopening the borders.

"I am not sure what date in July yet, but certainly, in July God's willing, we will open up the borders," the prime minister revealed.

It's likely Skerrit was referring to the airport since the cruise lines have indicated that they do not intend to begin sailing again before 15 September.

However, the reopening of the Douglas Charles airport does not mean a surge in tourist arrivals will follow. While St. Maarten said at the weekend it would accept arrivals from here beginning 22 June, which means WinAir will be able to fly between the two countries, the primary carrier of passengers to Dominica is LIAT. And the financially struggling airline is unlikely to resume commercial service before the middle of September, at the earliest.

In a letter dated 11 June sent to the union representing its pilots, LIAT said it needed to extend the layoff of the pilots by three months due to its chronic fiscal problems, made worse by the COVID-19 pandemic.

The airline's human resources manager, Samantha May Francis, said in the letter that while it has operated limited service during the pandemic, providing cargo and chartered flights, this was "insufficient to cover the company's costs".

It's a problematic situation that Skerrit must be aware of, along with the dire position in which this will leave Dominica, Martin said.

"What's the underlying cause that you're not even realising that the [air] services to your country are not up and running next month?," he asked.

The absence of LIAT flights for another three months could deal a crippling blow to the tourism sector, which was beginning to recover from the catastrophic 2017 hurricane Maria before the onset of the coronavirus.

After receiving 5,762 visitors in January, a 4.4 per cent drop when compared to the same month last year, the numbers skyrocketed to 9,500 in February, according to statistics from the Barbados-based Caribbean Tourism Organization – likely due mainly to carnival.

However, as the virus caused havoc in the travel industry in the Caribbean and around the world, and despite the fact that Skerrit waited until 26 March to close the borders, the numbers plummeted in March to 2,888, a fall of 70.3 per cent. And while figures were not available for April and May, the performance is expected be even worse.

Over 2,000 tourism and related jobs have been lost here due to the pandemic, Martin told The Sun, as he insisted on the involvement of all stakeholders in planning for the new tourism that will emerge from the crisis. "What is said is a non-statement because there is no plan, and there is no effort in trying to figure out what is going to be the state of tourism given the new reality. You cannot just open to what you had before, because it doesn't exist," the hotelier told The Sun.

"So there is a deeper problem where there is nowhere in the public sector or the private sector that is engaging [to discuss] in light of the pandemic, in light of the hurricane season, in light of the global economic chaos, what type of tourism will work. So to me that's a non-issue because it just uncovers the fact that there's no governing," he concluded.