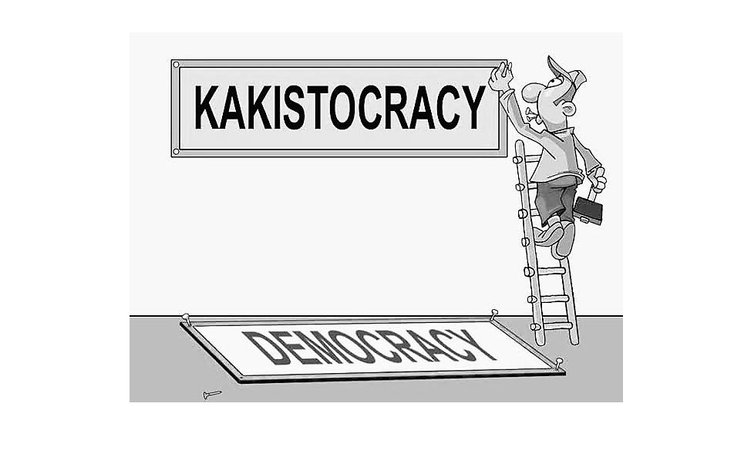 A kakistocracy is …a system of government that is run by the worst, least qualified, and/or most unscrupulous citizens.

Unfortunately, that is exactly what we have in Dominica today.

In seeking to determine the truth and appropriateness of this characterization of the current regime we need to examine the action, utterances, behavior, and modus operandi of the people in power. In the first place, this bunch of 'unscrupulous' people is operating under the big LIE that they are the Dominica Labour Party. In fact, they are just imposters who spent most of their time undermining the DLP and vowing its destruction but now, like touloulou, they are hiding under the building work of people like Patrick John. You cannot be a constitutionally functioning political party and have not held a convention for that many years!

On the other hand, this kakistocracy is being led by a TIN POT DICTATOR who beats his chest and declares that 'I run things in Dominica' and 'nobody holds a gun to my head'! But alas… as soon as the bus drivers blow their horns; college lecturers call their students together; Vaughn Dodds cranks his dumper or the seafarers drop their anchor he melts like an arriri before an approaching hen.

The kakistocracy is under the direction and control of multiple players outside of Dominica. These include:

As if by way of revenge for the humiliation at the hands of his external bosses, Mr. Skerrit has reduced elected parliamentarians to a state of 'operational nothingness'. Notwithstanding their collective responsibility for the affairs of the country, they know nothing about the whereabouts of the missing billions under the control of Hayden and Skerrit.

Government parliamentarians have been reduced to choir boys and girls in the House of Assembly. Their leader has kept all significant portfolio subjects to himself and directs the choir members to read out 'the matters standing in his name on the Order Paper' while he sits there and smirks at their humiliation!

But it gets worse. The PM publicly castigated the compliant and complicit Speaker for illegally reading out in parliament a question from the Opposition Leader which was not actually asked on the floor of the House. Such a howler by JI, along with his other outrageous rulings, makes him a clear and present danger to our parliamentary democracy.

This group of …least qualified, worst and/or most unscrupulous citizens… masquerading as a government is even prepared to allow the Prime Minister to endanger their lives and those of other Dominicans (including their constituents) by encouraging, facilitating and supporting him in breaching Covid-19 protocols.

It is a fitting description of a government that will so casually allow Ross to abandon Dominica after 40 years and seem quite happy about our country's loss.

It is an appropriate description of a government that agrees with a regional leader that an international airport is not necessary and 20 years later embarks upon such construction without any drawing, without any study, without any money, and most of all, without any sense!

The people of the Commonwealth of Dominica have been called to ARMS and to ALMS by the kakistocracy.

The kakistocracy has militarized the police service and they have made us a mendicant and begging dependency. There must be an appropriate response by ALL the people and by ALL institutions of the people.

The police must resist the dictates of the powers that be to use them as a brute force against their fellow citizens. They can start by insisting on being on duty in plain clothes or their black and grey legal uniform.

The response to the call to ALMS must be—

We want our independence

We want our money back