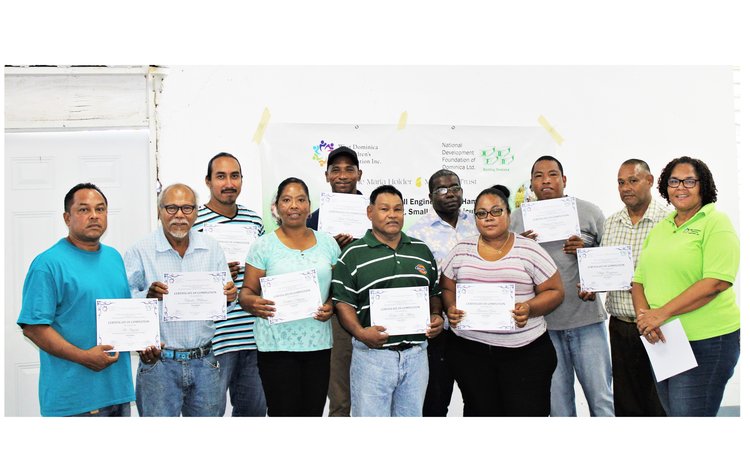 The Kalinago Territory is continuing to develop its resilience and response mechanisms to natural disasters, this time through the successful training of amateur radio, or ham radio, operators.

This project spearheaded by the West Dominica Children's Federation (WDCF) recently wrapped up and saw 10 individuals successfully completing the course. Among those ten participants were former Kalinago Chief, Charles Williams, and three women.

Beverly Baron, coordinator of the WDCF says other communities have benefited from amateur radio courses.

"We chose four communities which we felt were most vulnerable, Morne Prosper, Bagatelle, Soufriere, Coulibistrie, and then got a request from the Maria Holder Memorial Trust to include the Kalinago Territory," Baron said.

To date, Morne Prosper, Bagatelle, and now the Kalinago Territory have completed this amateur radio training. While Soufriere was originally on the list for training by the WDCF, this has been replaced with Mahaut as another organization conducted an amateur radio programme there.

Hurricane Maria of four years ago severely impacted the Kalinago Territory rendering all communication systems useless. The wide span of the Territory made it difficult even for people in the area to know what happened.

"We are hoping that they can form a structure among themselves and also with the whole of Dominica and the wider world to get back online as soon as possible after any disaster to keep persons informed of their situation and in letting outsiders know what help is needed in the Territory," Baron said.

As part of the course there was a hands-on day at Scotts Head conducted by the Waitukubuli Amateur Radio Association which helped to set up antennas and communicate with individuals in Dominica, the Caribbean, and as far away as Germany.

While Baron is pleased that the course was successfully completed she admits it did come with challenges. There was downtime around the election period in 2019 which continued into Christmas and Carnival in 2020.

Following the break due to the holidays, the programme was further delayed by the COVID-19 pandemic which arrived on the country's shores in March 2020.

"It just became difficult to get people to get back on track and get the classes restarted," she said. "But once we got started those who were really interested pulled through and got to the end."

Participants of this course were receptive to learning the new skill and how it could be used to help develop resilience in the Territory.

The amateur radio course in the Kalinago Territory was in the pipeline for some time and made more relevant after Hurricane Maria. The participants were grateful their community was chosen and that the course persisted despite the setbacks.