Karana "Cathy" Thomas: "The wind started to toss me from side to side… I was like a kite in the air" 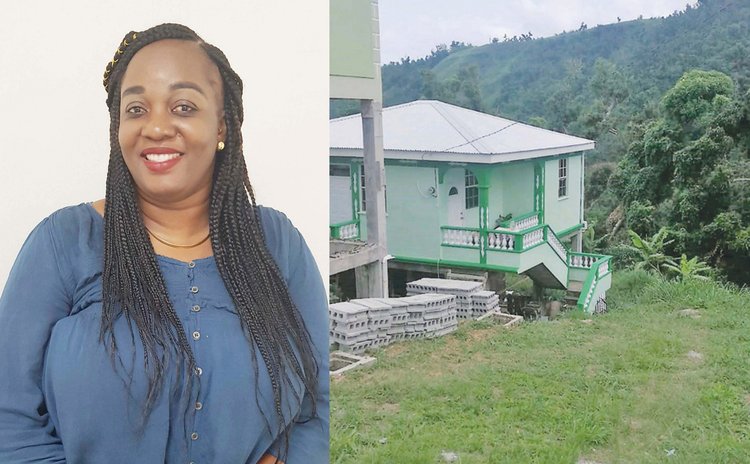 Thomas, right, and her repaired house

Karana "Cathy" Thomas lives with her brother at Bellevue Rawle in Stockfarm. When Hurricane Maria crashed into Dominica on September 18, 2017 Cathy was at her home preparing for a storm that was barreling towards Dominica.

"I was around not really bothered that it was going to be that serious and watching TV on my phone," she said.

Thomas said Bellevue Rawle is located on top of a hill and usually the wind is strong up there.

"The house was shaking really bad. My brother was in the other bathroom and I started to shout to tell him that it was not safe in the house and let's seek shelter elsewhere. The force of the wind then burst a few windows and the wind was now fully in the house with all its force and the house was shaking to the point where we said it was going to collapse. So my brother and I ran outside. He ran to the neighbour downstairs but I felt the wind was much too strong for me, so I ran back and held on to the banisters on the porch. The wind had me in the air while holding to the banisters for like an hour plus," she said.

She continued: "Thanks God I have weight, plus my wet clothing and I was strong because the force of the wind would have sent me to the precipice which is at the back of my house. I was scared and saw death. I started shouting for help and then remembered that I had my phone in my hand and was using it as a form of a signal for my brother who tried on several occasions to come to my rescue but the force of the wind made it impossible.

"My hand was getting weak and I decided to drop the phone and started to scream and cry for help. I was like floating and death was in sight. My crying and screaming were in vain because no one was able to hear me and come to my assistance so I went into prayer and jumped down. I fell under my step and sustained injuries to my foot. The wind started to toss me from side to side; I tried to go back to where I was before but I was like a kite in the air. My brother came back for me and we had to crawl on hands and knees to get to the neighbour," Thomas said.

She said they burst the neighbour's front door to gain entry to the house but the neighbour's roof had been blown away. They were hiding in cupboards so she and her brother ran across to the newly built Grotto Home and that was where they stayed for the rest of the storm.

"I had wet clothes on me. I had no change of clothes. I had lost everything so I had to keep them on for the duration of the night. It was a very terrifying experience and one I shall never forget, one that I do not want to experience again. After that I had to seek counseling. Once I hear wind and rain I get scared and terrified," she said.

She thanks DIGICEL, her employer, for its support after the hurricane.

"The next day what I saw was horrifying and sad. The place was destroyed almost beyond recognition. Trust me that experience was a nightmare and the worst time of my life; I will not want to even have my worst enemies experience such an ordeal. I am a praying person and God saved me throughout this ordeal which was my first experience of a hurricane," she said.