Karate: Good for the body and the mind 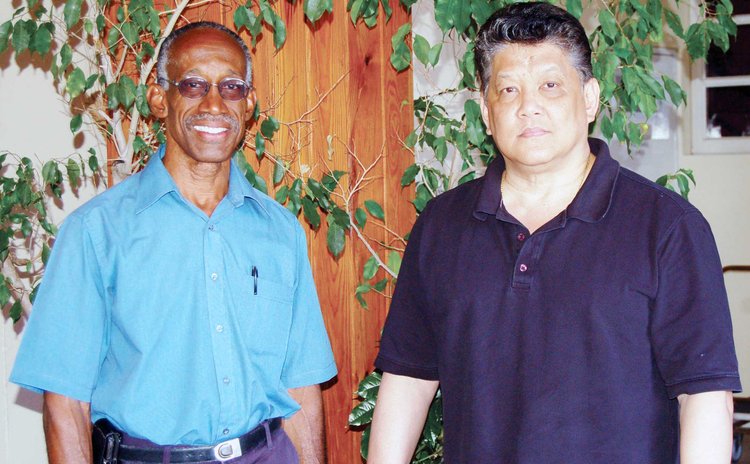 Frank Woon-A-Tai, world renowned karate expert made his annual visit to Dominica from April 19 to April 21 2015.

Woon-A-Tai is currently a 9th dan (black belt), with 51 years practicing karate and as of February 2, 2011 founded the International Karate Daigaku (IKD) in Toronto, Canada.

He told the Sun that he taught himself karate in his home country of Guyana.

"Then I graduated to books and movies and video and then I went to England and then Japan where I had my formal training there for six months; I got my first degree black belt there," he said.

From its inception, IKD has dojos (practice halls) in 49 regions in 30 countries including Dominica. IKD uses traditional and modern applied research to offer the highest level of karate to all its students; it also hopes to uphold standards of excellence that inspire the students to improve their character and instil core values of respect, honour and discipline.

Woon-A-Tai told the Sun that every year he visits the islands to inspect and make sure everything is right and up to standard.

"I was very happy to see Sensei (teacher) Winston (Sensei at Dominica Shotokan Karate Association) has developed it and they have a new dojo, the standard is very good and many of them skipped ranks which means the standard is very good. I have started in Guyana then I went to Barbados, Trinidad, Grenada, St Vincent, St Lucia, and Dominica, then to Antigua and then Jamaica," said Woon-A-Tai.

He added that in karate there is the dojo kun which are the principles any martial artists should follow especially the young.

"There are numerous benefits for young people; we have the dojo kun, those are the principles we live by or any martial artist should live by; it is character, sincerity, effort, etiquette and self-control and that helps the student not only in karate but in everyday life," he said.

"Sincerity holds family together and the other aspect of the dojo kun is respect for others, respect your spouse, respect your children, your children respect their parents, their teachers and to refrain from violent behaviour," said Woon-A-Tai,

He noted that self-control is the most important aspects because if someone can control their emotions there will be more peace in the world.

"Violent behaviour starts when you lose control of yourself and emotions and you get mad and you get wild so karate is good for discipline," he said.

In addition, he stated that "Young people are attracted to karate because of the beauty and power of karate technics and they would be influenced by our guiding principles and it will keep them off drugs in the streets, it will help break the cycle of crime and violence and it is working in the inner cities of Jamaica."

"I hope that more young people in Dominica, not only young their parents, family and friends I would encourage them to take up karate because it is good it is a good form of self-defence, it is not only for the body but for the mind and spirit as well," said Woon-A-Tai.