King Dice de 7th did not get his eighth crown; Gregory "Karessah" Riviere grabbed it first 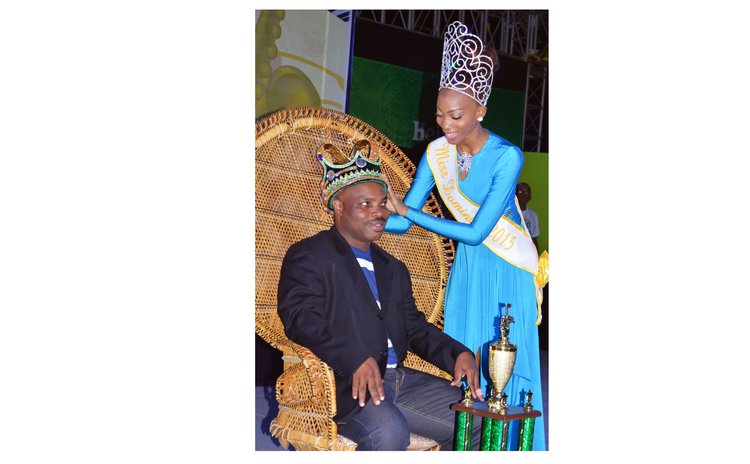 If any calypsonian alive had any reasonable chance of kicking King Dice out of his throne it would have been Karessah. And that's just what the two-time King did when he unseated the seven-time King at the grand 2015 Calypso Finals at the Windsor Park Sports Stadium on February 14, 2015.

Thousand screamed and shrieked and cried like wounded pirates when the winner of the greatest prize in Dominica's carnival was announced. Unbeatable Dice beaten? Really?

Yes, really; the 2015 Calypso King is Gregory "Karessah" Riviere. He won with two stunning performances of 'Call Me Name' and 'Flush It'.

"It was a lot of hard work, at six o' clock I was up trying to put things in place and I think this is one of the biggest victories I ever had in a calypso competition," said the King after he was ushered to occupy Dice's throne. "Not to dethrone King Dice, you dethrone the seven times king and that's a big achievement."

He added: "I would expect the commentators to really analyse that. This is a man who came out from nowhere, down under and dethroned the seven time king. I must say congratulations to King Dice and all the other competitors. I think they did an excellent job."

He continued: "This show was exceptional, I mean everyone really came out to win but the judges found favour in me because I know I really had a tremendous show this evening. Every performance is unique, it depends on the competition at the time, it depends on the timing, the issues around. I think this time around I was very consistent in both rounds; in the first round I think I had it right up there, the second round I think it was all the way up there; so in terms of consistency that would be the case."

He urged other would-be Kings of calypso to use more creativity in their compositions and hope that they can imitate his level of creativity.

"In my first song the level of creativity in the lyrics I think was much higher than the other songs over the season and I would just hope that our calypsonians will do a little more in terms of their lyrical content and maybe that's of the song they could really emulate because that song is a song that could be played anywhere and it's a song that nobody can really get vex with you about. It has lots of humour and fun but at the same time it has a very strong and serious message," the King advised his subjects and the vanquished.

The First Runner Up position went to the over-thrown Dennison "Dice" Joseph who sang a rather un-Dice-like 'Imaging Man Living Forever' and the more-popular 'Living in a Fool's Paradise'.