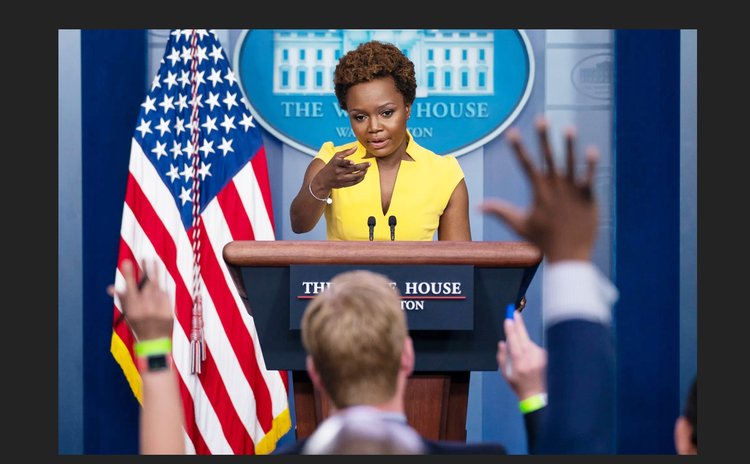 The White House press secretary is a presidential administration's face to the national media and, by extension, to the country and the world, writes the BBC.

"The individual can become an instantly recognisable figure in times of national crises or political scandal. They often develop cult-like followings among some - and are the butt of jokes for others", wrote Anthony Zurcher, North America reporter for the BBC.

Ms Jean-Pierre, 44, has served as the administration's principal deputy press secretary since Mr. Biden was elected.

Born on the French Caribbean island of Martinique and raised in Queens, New York, she was a key political director in the Obama administration.

Ms. Jean-Pierre will replace outgoing press secretary Jen Psaki, 43, in the top role at the end of next week. Ms. Psaki is taking up a job at the MSNBC cable news outlet.

According to the Poynter Report<, CNN's Kaitlan Collins wrote: "Last May, Jean-Pierre became the second Black woman in history to hold the daily press briefing. She has served on the White House's senior communications team since Biden took office and before that was an adviser to his campaign and chief of staff to now-Vice President Kamala Harris. Jean-Pierre is familiar with her new role. She is often in the room when Psaki briefs reporters, has filled in for her for at the lectern and has also gaggled with reporters traveling with Biden on Air Force One. Recently, she replaced Psaki at the last minute for Biden's four-day trip to Europe amid the Russian invasion after Psaki tested positive for COVID-19 the day before Biden was scheduled to leave."

"She will be the first Black woman and the first openly LGBTQ+ person to serve as the White House Press Secretary. Representation matters and she will give a voice to many, but also make many dream big about what is truly possible."

Psaki also wrote, "She is passionate. She is smart and she has a moral core that makes her not just a great colleague, but an amazing Mom and human. Plus, she has a great sense of humor. … I can't wait to see her shine as she brings her own style, brilliance and grace to the podium."

CBS News' Kathryn Watson writes, "Jean-Pierre, 44, was born in France and is the partner of CNN's Suzanne Malveaux. They have a young daughter. She worked for the Biden and Obama campaigns, and has served as an NBC and MSNBC political analyst.

The Biden administration has been placing emphasis on putting black women - frequently considered an essential, but politically invisible part of the Democratic Party coalition - in positions of power.