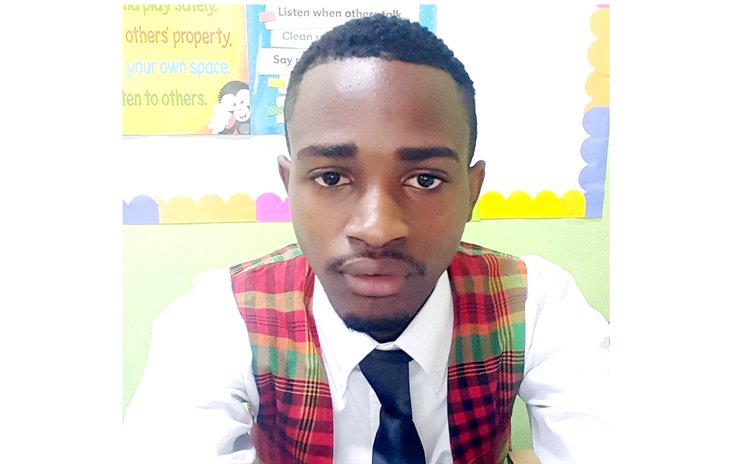 A 21-year-old teacher of the Jones Beaupierre Primary School is continually taking action to mobilize youth in the east to engage in community work and youth development activities.

Kevin Scott, who is from Petite Soufriere but lives in Good Hope, started his career in education as an education mentor under the National Employment Programme (NEP) in 2018. He went on to teach at the Morne Jaune Primary School in January 2020 and subsequently moved on to the Jones Beaupierre Primary School in September 2021.

Scott is currently pursuing an associate degree in elementary education, which he started in 2018. This is his final year in that programme.

His passion for youth work stems from humble beginnings and his desire to assist people, especially those in need.

"Whilst growing up heartbreaking situations of others inspired me to become deeper into youth involvement where I can reach out to a lot of young people," Scott said.

Kevin has been involved in the Dominica Red Cross, New Testament Worship Centre Church Youth Group, and the Good Hope Youth Group where he is currently president. He also participates in youth development division programmes in the east which keeps his advocacy and social life robust and fulfilling.

As the newly elected president for the eastern district youth council (the eastern district covering Kalinago Territory to Petite Soufriere) Kevin, along with his team, is ready to make a significant change in the east with the help of all the youth groups, leaders and those wishing to pledge their support.

Kevin's work with youth groups dovetails perfectly into community involvement which has helped mould him into the compassionate, helpful young man he is today.

"Community involvement has taught me to become a great leader, an inspiration to many who have no hope, to show love and care for many who are hurt, to show support to many who feel like the whole world is against them," he said.

Kevin's engagement in youth and community work over the years has also come with its challenges. He told The Sun that among the obstacles towards creating sustainable and effective youth programmes is financial aid.

"I have tried many projects to get the young people involved and the most common challenges were financial assistance, involvement of community leaders and the cooperation of businesses coming on board with the movements which I believe would have avoided school dropouts, high drug dealings and high violence among our youth," he said.

Despite the push for and success in hosting capacity building activities for the youth in the eastern region, another concern is the apparent lack of interest by the young people themselves. The low number of participants in the workshop is also a cause for concern.

"They are not encouraged or motivated to participate in events or community involvements which will boost their leadership abilities," Scott said. "Oftentimes leaders cry down on them [the young people] for simple mistakes and never help them to be better individuals. So just this, at times, discourages the many to even try," he said.

To this end, Scott is imploring the wider public to find a way to give back to your community in one way or another, either cash or donations.

"I would also like to call on the many young people who hide their leadership qualities to come out and use it for the uplifting of your community and for your development as a young person," he said.

Scott is challenging adult leaders and authorities to stop pushing away the youth and complaining of the bad they do. He would like to see said authorities and leaders acknowledge the good the young people do and put plans in place which involves the youth to further uplift themselves.

"They are the future," he stated firmly, "and if we don't take the step now to involve them in community work we are failing them and future generations."