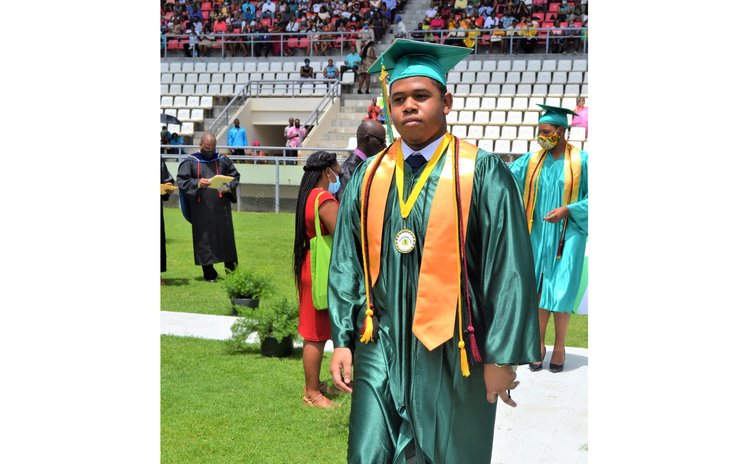 Overcoming the adversity, which he and his peers had to endure over the past four semesters, was the central focus of the speech by this year's Dominica State College (DSC) valedictorian Khahil- Akil Richards.

Addressing the 19th commencement ceremony on July 22, 2021, Richards described his generation as one that is oftentimes unsure of its true potential. A generation that has lived through ravaging storms, a category five hurricane, and are now living through a pandemic that has brought the world to its knees.

"However, despite it all, here we are over 200 of us, persevering against insurmountable odds, powerful beyond measure indeed," Richards said.

Entering the gates of the country's main tertiary institution in 2019, this year's top student noted that it certainly did not dawn on him or any of his fellow graduates that their college experience would come to a screeching halt only after one semester due to the pandemic.

"As young people, we often feel invincible, unstoppable, and free. But none of that mattered in March 2021," he said. "While at times, it often felt like some bad horror movie that we all hoped he could walk away from. Sadly, it was not a movie. We experienced this ourselves. And sad to say, there are students all over the world who are still experiencing this."

While he emphasised that recommencing face-to-face classes in September 2020, was the easiest, in the moment of hardship, he was reminded of the words of J.K Rowling which says, "you will never truly know yourself or the strength of your relationships until both have been tested by adversity. Such knowledge is a true gift."

"We have been tried and tested and indeed continue to show we are powerful beyond measure...I have learned throughout my tenure at DSC, that adversity makes you stronger. That staying with the fights increases fortitude, and that diligent, consistent effort has success as a reward," Richard said.

In his words of encouragement to his fellow graduating class, Richards called on them as young people to not give up, even if at first they do not succeed when trying something new.

"Let us use our youth to generate positive change," he said. "Graduates, let us not waste our youth on idleness and violence, but instead, make maximum use of our blessings, which are many but with which comes responsibility."

In his closing remarks, he noted that while the world continues to face disasters such as the pandemic, destructive climate change events, and so much more, everyone needs to play their part to ensure the survival of our planet.

"Graduates, let us answer the call to use our expertise and schools to make a difference in our schools, families, country, region, and the world at large. Class of 2021. Together, we have crossed the finish line at this juncture for our journey. I can now celebrate as champions, let us continue to always be champions, empowering ourselves to be part of the solutions to the world's crisis," Richards said

Two hundred and ninety-nine degrees have been conferred in various fields of studies to this year's graduating class of the Dominica State College (DSC).

At the 19th Certificate commencement ceremony held at the Windsor Park Sports Stadium (WPSS) on July 22, 2021, the graduates heard from the President of the DSC Dr. Donald Peters who delivered the charge address, featured speaker Minister for Public Works and the Digital Economy, Cassanie Laville and this year's valedictorian Mr. Khahil- Akil Richards.

This year's special award went to Nia Belle and Semaj Bernard for volunteerism, leadership, and community spirit, while the Division of Tourism and Hospitality Studies special award for leadership was bestowed to Giahe Challenger; the Faculty of Applied Arts and Technology, special award for farm practice went to Gervern Carbon.

At the ceremony, the Science Technology Engineering and Mathematics (STEM) Club took home the plaque for the Club of the Year.

Earlier in the week, 63 students from the graduating class of 2021 received their honour cords, certificates, and programme awards for accumulating a GPA of 3.5 and above as well as students who top their degree programmes in their graduating class with programme grade point averages of at least 3.0.