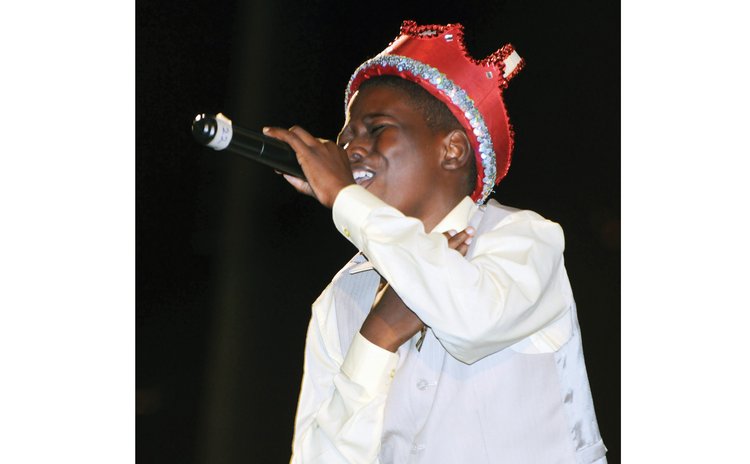 Lemar "Irish Kid" Irish has captured the Junior Calypso crown for the second in two years.

"I am feeling great! I am feeling elated! I am happy, I am energized," said Irish Kid a student of the Portsmouth Secondary School. "This took a lot of work, I put a lot of work into it so I can be the best I can be."

To prepare for the competition held on Thursday, January 29, 2015 at the Harlem Plaza in Newtown, he said: "I had to come Roseau every day by my writer to practice and get everything perfect."

His song, entitled "Role Model", written by former calypsonian Livingston "Spenser" Castle, speaks to the ills and abuse that goes on in society today.

"There is so much illness in the society such as abuse, crimes and drugs, so I wanted to sing a song based on that to show everybody I am there role model," he stated.
Tatyana "Taty D" Dangleben from the Convent High School was the first runner up with a song entitled "Know your friends". Missing the top spot did not matter much, Taty D said.

"I felt no way because I know I put my best foot forward and the judges' decision was final and I know I did my best and I went out there to have fun," she said. "If anything I had to do differently was to be myself, be more confident with the crowd."

Nickima "De Empress" Alfred, a first former from the St Martin Secondary School, emerged third runner up with a song entitled "Living in an I world" written by Ian Jackson.

She said that though she did not win she still feels excited and noted the fact that she "will get them good next year" and add more expression to her performance.

De Empress said her song was based on the fact that people are so wrapped up in technology that people in need are not given attention.

"We use things and we don't have time to visit the lame or the sick and we not really checking the elderly; so the IPhones, ITunes, IPads and the IPods that's what my song was about," she stated.

Meanwhile, the President of the Leo Club Shari Joseph stated that she was satisfied with the show.

"I did not get to see it physically but to me the children really brought g out their messages, their songs they really showcased their talents," she said.

The Leo Club has been organizing the National Junior Monarch Competition over the past 20 years.

"We say the same thing every year and something always comes up and in life there are always advantages and disadvantages so I am not really sure of what really but at our post mortem we will sit down and we will talk and see exactly what needs to be adjusted for next year," she said.

Miss Joseph said that thought she was not fully satisfied with the sponsorship the Leo Club is still grateful to those who sponsored.

"Sponsorship was coming in lately; we got some sponsors as of today. So I am not that satisfied but due to the economic situation there is nothing we can do right now but to be thankful for what we get," Joseph said.