Kimone Joseph: Let's be Honest about Investment in Education 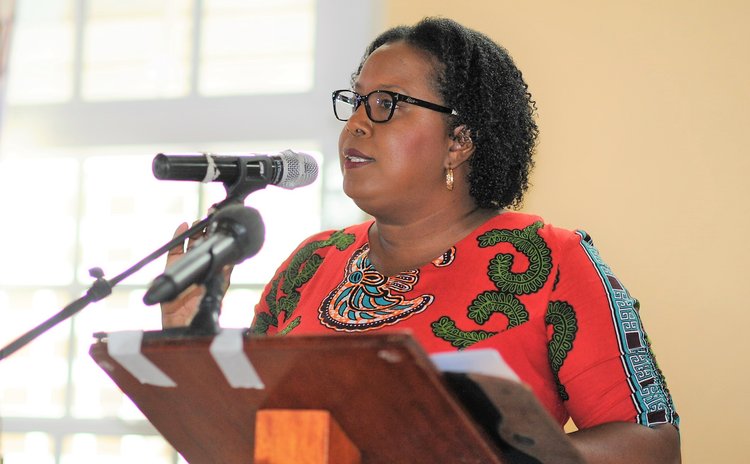 Parents, students and the State must make the necessary sacrifices, must make the required investments and must make real commitments if the level of education in Dominica is to improve.

Kimone Joseph, the Head of The University of The University of the West Indies (UWI) Open Campus, Dominica told members of the Dominica Association of Teachers (DAT) at their 20th Annual General Meeting last week held at the Goodwill Parish Hall that she believed that the three key elements of the DAT's theme (Education: An Essential Investment) were the home, the school and the State.

"My friends, when we speak about investment, we are talking about putting in something now, making a sacrifice now, in hopes of something greater later," Ms. Joseph said. "We cannot speak about education as an investment when parents are not prepared to make the necessary sacrifices for their children's future. Parents need to sacrifice not only funds, but time in order to ensure that their children do well".

Joseph said the home is the first classroom, the place where children receive "their basic needs, developing sensory stimulation and helping them to distinguish right from wrong" but many children are neglected as parents do no have their priorities right and do not know the value of education.

"Teachers, I am not going to waste your time here by sugar coating things. I was and still am a teacher too, so I know what you know," she said. "You know well that there are children who come to school without pencils, without books, without breakfast".

She added: "But what you also know is that when you call some parents in to talk about what their children need, their cellphone is much more stylish than yours, their weave is fresh and their nails are well done".

Similarly, Joseph said, teachers need to invest in their own education if they are to become true professionals.

"Colleagues, I think it is a travesty of justice to stand in front of children for nine months in an Academic Year, telling them about the value of education day in, day out, when we ourselves have not sought to educate ourselves at all," she said. "Now, I know that education cost money, but we are talking about investment, and we are talking about putting something in, in anticipation of something greater later. If we are going to talk about investment, we have to be frank about some of the attitudes of some of our peers when it comes to furthering their education and developing themselves". She continued: "Colleagues, let us be serious. If we want to be taken seriously as a profession, we have to be professional. Part of being professional is a commitment to learn and to grow".

As far as the State's responsibility is concerned, Joseph said teachers have to be paid appropriately if they have to benefit from their investments in their own education.

"While we are on that subject, I wish to register a plea for appointment and promotion of teachers who have invested in their education. As much as I support teachers taking the initiative and doing their degrees and training programmes, we have to be real: education costs money, and if someone is going to make an investment, they should expect the returns to be worth it.

"It is disheartening to continually be struggling on a small salary, forcing to make ends meet and at the same time trying to develop yourself while waiting in line for appointment, not knowing where you stand. And if we are to be honest, we must admit that, like the nurses, Dominican teachers are looking for opportunities elsewhere".

Stating that many Dominicans are currently taking advantages of available opportunities offered by the UWI Open Campus, Joseph said "we must admit that not everyone in our country is really interested in education" and that Dominicans should be aware that Government cannot "pay for every, single person to pursue studies".

"If we want to have a conversation about investment, again where we put something in, in expectation of earning something greater later, it is unreasonable for us to spend our monies lavishly and then somehow believe that someone, somewhere must find the money to give us for education," she said.