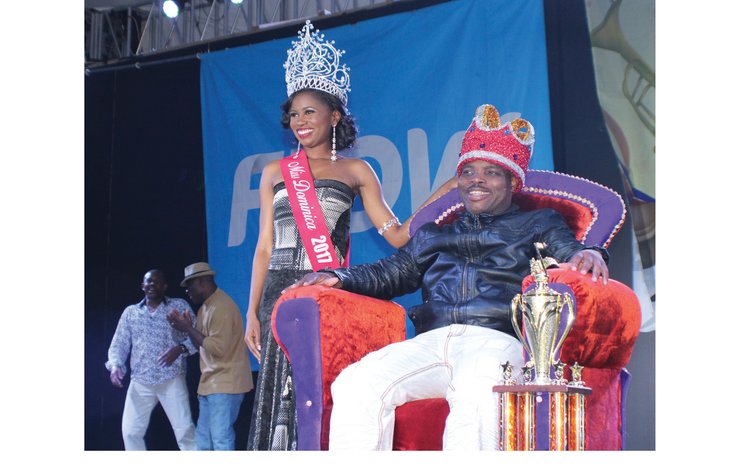 King Karassah and Queen Jade Romain at the Calypso Finals

If anyone could dethrone Dice, the 2016 Calypso King, in search of his unprecedented ninth crown, it would have been Karassah. And he did-by slamming Dice into a tied second place with Daddy Chess. Webb placed fourth.

On Saturday hundreds packed into the Eddie Andre Carnival City at the Pottersville savannah to witness the possibility of Dice's history-making crowning. But Karassah stole the show taking the Calypso crown out of Roseau, to Marigot, for the 4th time.

Jenius opened the 2017 Calypso Finals with a song entitled "Land of Promise"; however, it was not until Janae Jackson took the stage at number five that the competition began blazing. With a song written by her Dad (Ian Jackson) titled "Treat Them Right" and dedicated to the elderly, the 18-year-old Janae demanded that the nation demonstrates more respect for the elderly.

Daddy Chess followed with "Calypso Formula" and based on the response of the crowd, the former Calypso King assured that with a little bit of luck he could wear the crown in 2017.

But, as Calypso fans say, King Dice could not lose, he had to be beaten-whatever that means. Dice performed at his best at number eight bringing on stage, as part of his props, personalities like Ossie Lewis, Annette St. Hilaire, Athie Martin and others.

Round two of the 2017 Calypso Finals was like a battle of the gladiators as eight men and two women demanded more from their voice and their talent and their fans. At that point of the competition, it could be anybody's crown.

When the final results were announced, De Webb paced 4th, De Bobb lived to fight another day for his elusive first crown and Tasha P may try to be Dominica's female monarch number two in 2018. She was the first.

At the end, as Sunday morning beckoned, the MC created more suspense when he announced that there was a tie for the second and third positions- Dice, Karassah and Daddy Chess waited nervously on stage. The crowd held their collective breath; was Dice in the tie? No way!

"Ladies and gentlemen, Daddy Chess and Dice are tied. ...you have a new monarch…Karassah!" both MCs Peter Prosper and Alex Bruno bellowed.

" l was consistent," Karassah said afterwards. "The judges listened to my second song called "Second Round" since they already knew my first one- "Hook in a Minor"...I knew that I was strong and just had to deliver on the night which I did".